Prior to the Revolutionary War, an influential pastor by the name of Philip Mulkey settled in the Jenkinsville area of today’s Fairfield County. Partly as a result of his leadership, the Upstate, or “backcountry” as it was then called, attracted many members of the Baptist faith. In 1768 members from Reverend Mulkey’s congregation merged with another group near a stagecoach crossing called Gibson’s Ford and formed Gibson’s Meeting House, the mother church of Little River Baptist. The church was constituted in 1770. 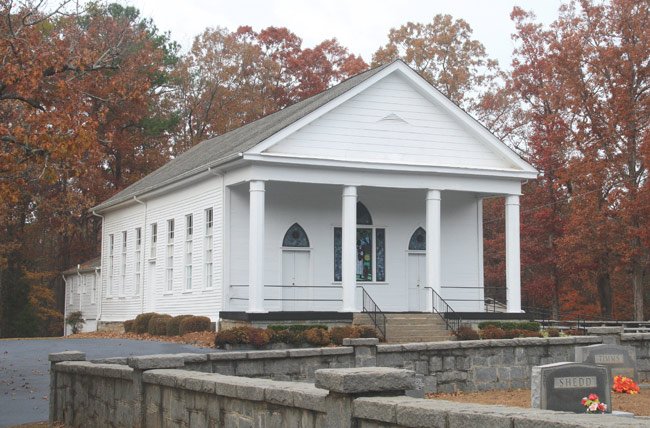 Mark Clark of Winnsboro, 2013 © Do Not Use Without Written Consent

Gibson’s Meeting House was the site of a 1780 Revolutionary War battle in which a Patriot militia, led by Captain Richard Winn (for whom Winnsboro would later be named), attacked Loyalists who had been using the meeting house as a place to gather and plan. Eight Loyalists were killed and another sixteen captured, making the battle one of the first Patriot victories since the fall of Charleston. 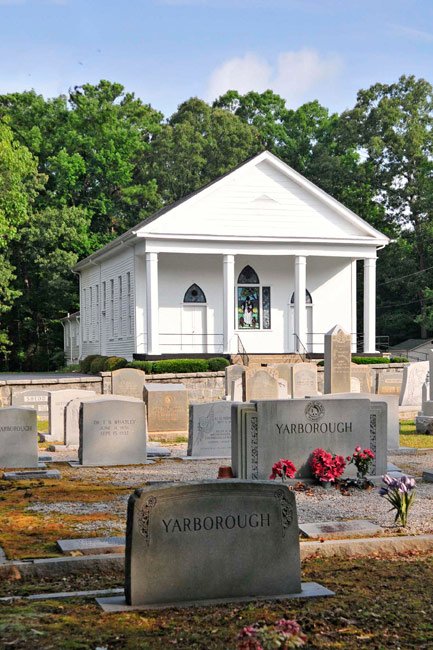 Renamed Little River Baptist, the present church was built in 1845 near the site of the original meeting house. It was dedicated by Reverend James C. Furman, president of Furman University and son of Reverend Richard Furman, the Baptist minister who helped establish the university in 1826. The church closed after the turn of the twentieth century but reopened in 1950.

Little River Baptist Church is listed in the National Register:

The Little River Baptist Church is significant for its architecture and as one of the older Baptist churches in the South Carolina upcountry. Built ca. 1845, the church is an excellent adaptation of the meeting house plan church mixed with popular styles of the period. The church is a rectangular clapboard structure of Greek Revival design with Gothic Revival details in the front facade. The front gabled roof is supported by four octagonal columns on a raised platform. Two front doors open off of the wide portico. A lancet arch with tracery of wood and glass tops each door with a central keystone. In the center of the pediment is a semi-elliptical louvered vent.

The church was apparently constructed by a local craftsman and has many original interior features such as straight-back wooden pews, flooring, and a balcony around three sides resting on columns. There is also hand-carved woodwork including a ceiling rosette from which hangs the original brass chandelier with glass hurricane shades and prisms. In the early 1950s a wing was added to provide Sunday School rooms and kitchen facilities.