Though Scots-Irish settlers arrived in present-day Ridgeway in the late 1700s, the town was formally established when a railroad from Columbia to Winnsboro was completed in 1850. The railroad was built on a ridge, giving the town its name. Residents of the Lowcountry had begun relocating to the area in the early nineteenth century to escape the heat and humidity of the coast, believing the Upstate would offer a healthier clime. The railroad further increased the population of Ridgeway, and soon more businesses began to pop up in the small town. 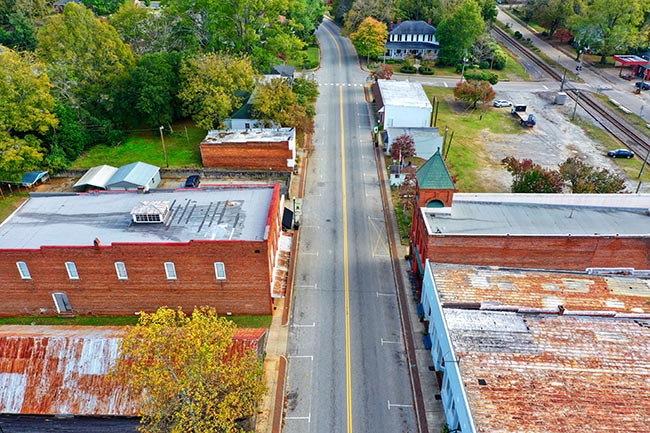 Mark Collins of Columbia, 2019 © Do Not Use Without Written Consent

David Ruff was Ridgeway’s first merchant, opening a general store in 1840 that still adorns North Palmer Street, the town’s main thoroughfare. In the pictures above and below, his wooden store with the peaked metal roof remains standing as a museum. (The neighboring store also goes by the name of Ruff’s.) 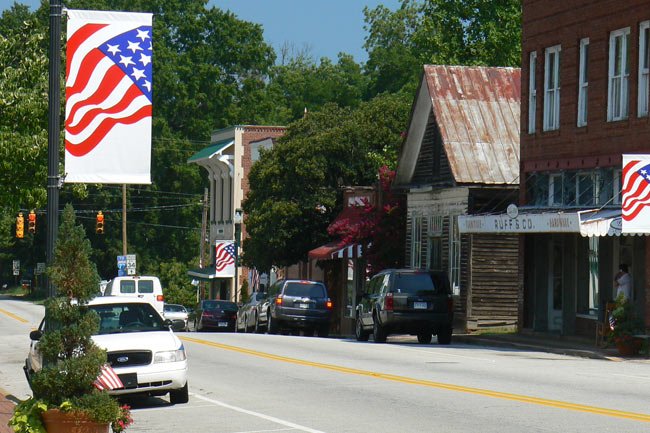 Palmer Street is Ridgeway’s main thoroughfare. The street was named in honor of Edward Gendron Palmer (pronounced PAL-mer, with a flat a), one of Ridgeway’s first settlers. Palmer was a Huguenot from the St. James-Santee Parish near Charleston. A planter, Palmer lived in a grand home at nearby Valencia Plantation, which he built in 1834, and also established Cedar Tree Plantation in 1853 for his son, Dr. John Davis Palmer. In fact, prior to the arrival of the railroad, the area now known as Ridgeway was called New Lands, the name Edward Palmer gave to his parcel of more than 6,000 acres, which he acquired in 1824. 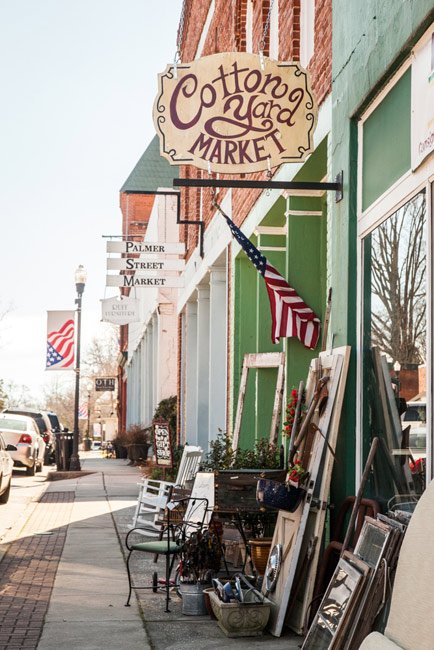 During the Civil War, a home in Ridgeway known as the Century House was used as a headquarters for General Beauregard from February 17-19, 1865. General Beauregard was evacuating Columbia before the arrival of General Sherman. Today the historic home serves as Town Hall. Other independent businesses thrive in historic buildings, such as Laura’s Tea Room, which occupies the top floor of the former Thomas Store, built in 1880. Also downtown is Ridgeway’s first Methodist church, Ruff’s Chapel, established by aforementioned merchant David Ruff in 1873. 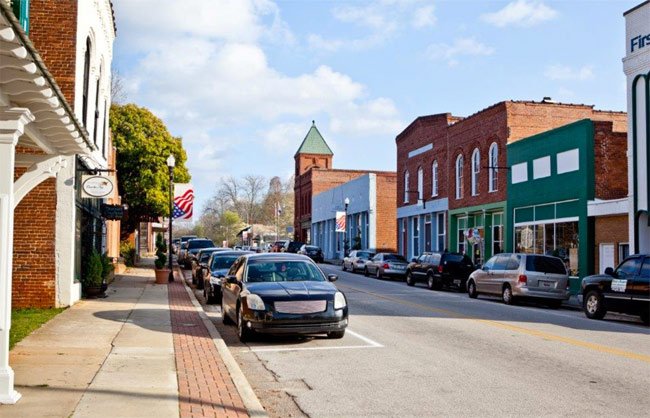 Courtesy of the Town of Ridgeway

Below are more photos of historic buildings in downtown Ridgeway. The Ruff name can be found all over town; even if a building doesn’t bear the ubiquitous surname, some structures can still trace their history to the Ruff family. The Ruff and Company building, pictured directly below, was built in 1901 and stands next to the original Ruff Store, seen above. Today the store is owned and operated by Dan Ruff, a sixth-generation of merchant of the Ridgeway family. 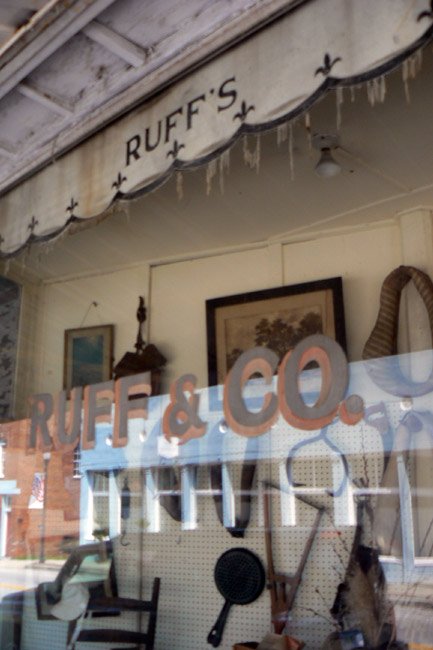 The original Ruff Furniture Store, seen below, was built around the same time. The turn-of-the-century brick building is now occupied by the Palmer Street Market, the parent business of Cotton Yard Market, seen at the top of the page. In fact, the businesses are housed in three adjacent commercial buildings. Ruff Furniture remains in business and now stands next door to Palmer Street Market in the former Johnson building, a commercial building erected in the early 1900s by W.J. Johnson. 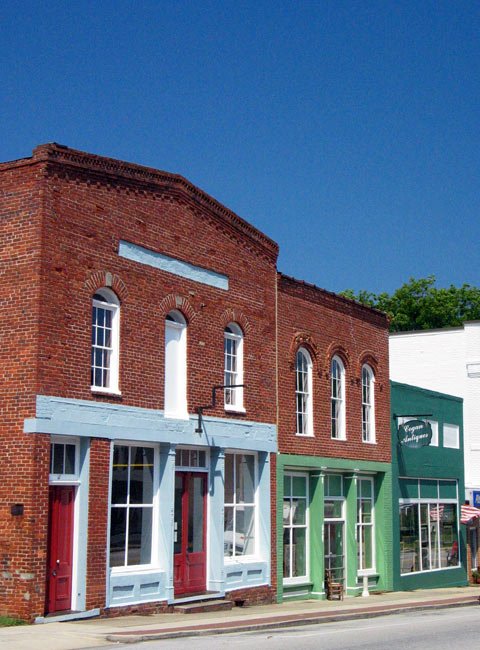 The cotton gin seen below was added to the landscape in 1947 as Ruff’s Gin House. Murray signs hang from the building because the gin was made by the Murray Company of Texas. The name Murray appears on many other gins across the South (1). The industrial building is presently used for storage. It stands behind the 1840 Ruff Store. 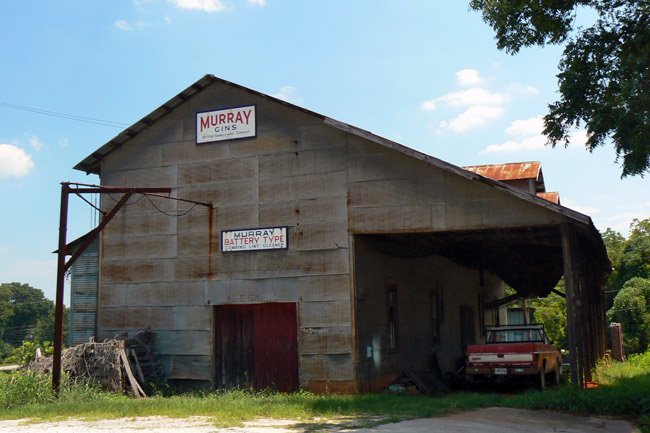 R.H. Lee and Company Auctioneers is located within another early 1900s building downtown. The brick structure has been an A-Model Ford dealership as well as a cotton warehouse. The business showcases its passion for antiques with a cashier’s window from the old Kershaw County Courthouse and carriage lights from Winthrop University. 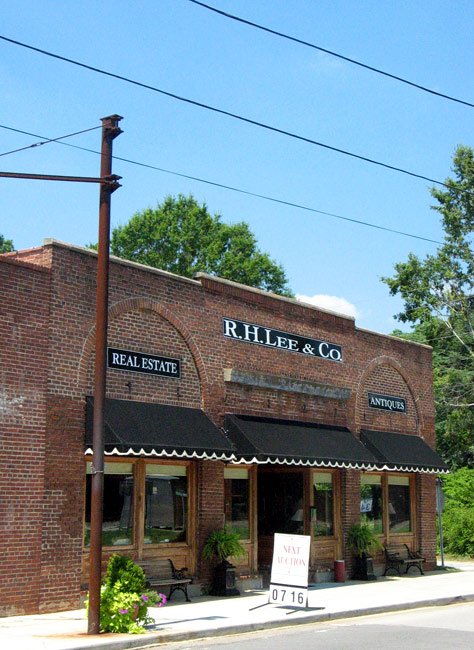 The water tower stands next to the cotton gin, behind the old Ruff Store, providing water to this town of about 300 people. It also lets visitors to the charming village know that they have arrived at their destination. 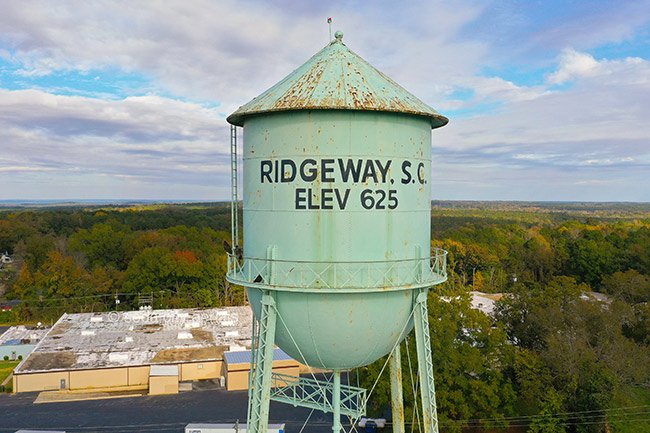 Mark Collins of Columbia, 2019 © Do Not Use Without Written Consent

Below is a remnant of Hollywood, a mural from the fictional restaurant, McDermott’s Chicken. Set in Ridgeway, the 1989 movie Staying Together was filmed in the South Carolina town. 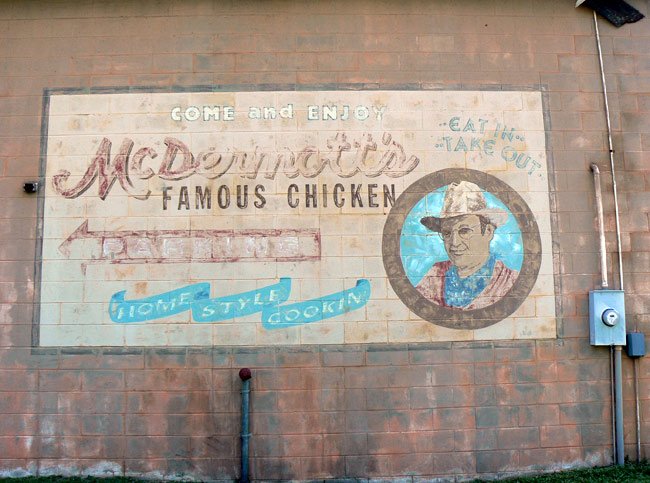 A relic from the old Ridgeway High School stands sentry over the town. The school opened in 1921 and closed in the early 1960s. It was demolished, save for this entranceway, in the early 2000s. 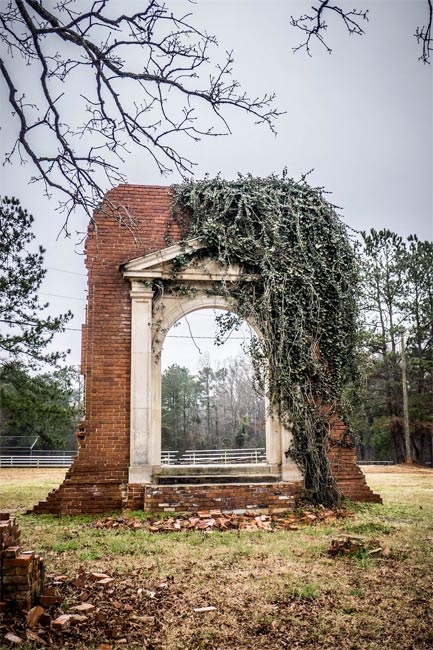 Many of the commercial buildings in downtown Ridgeway are listed in the National Register as the Ridgeway Historic District: