This unusual home in Greenwood was built in 1851 for wealthy farmer Robert Gillam. Gillam named the home “Sunnyside” for author Washington Irving’s Hudson River Valley estate of the same name. The house is distinct, sitting on a 3.65-acre lot in town and combining elements from both Gothic and Greek Revival styles. Gillam lost Sunnyside during the economic devastation that followed the Civil War, and it went to auction and was purchased by his son-in-law, Augustus Milton Aiken. Aiken and his wife lived here until Mrs. Aiken’s death in 1877. It then changed ownership a few times before Harry Legare Watson bought the home in 1906. 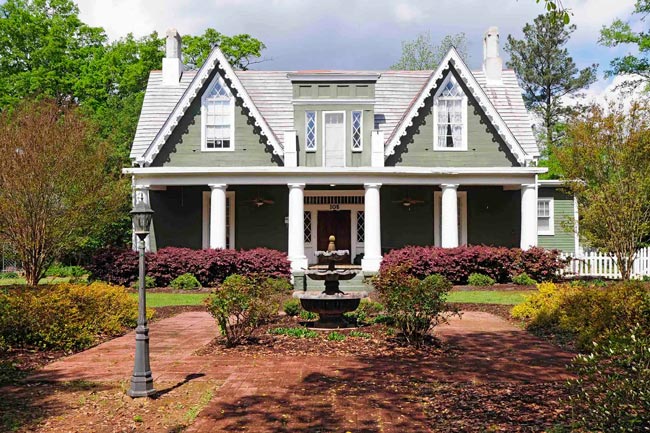 Watson was a distinguished Greenwood resident, owner and publisher of the local newspaper from 1900 until his death in 1956. During this time he also served as president of the South Carolina Press Association as well as a board member of the Greenwood Public School System and Furman University. The home stayed in the Watson family until 1974.

Sunnyside is listed in the National Register:

Sunnyside is an unusual example of a blend of the Gothic Revival and Greek Revival styles of architecture. Historically the house has been associated with several locally prominent individuals, who have made substantial contributions to their community. Built in 1851 by Robert Gillam, Sunnyside is a one-and-one-half story house with flush board siding covering the front façade and weatherboard siding covering the remainder of the house. It is basically Gothic Revival in style, featuring a gabled roof and dormers with scalloped bargeboard. Greek Revival elements include the portico covering the front façade and the heavy proportions of the interior details. There are two compound interior chimneys located on each front gable end of the house and one large interior chimney located in the central rear section of the house. Sunnyside was originally built with a T-shaped floor plan. In 1906, Harry L. Watson, editor and publisher of Greenwood’s newspaper, purchased the house. At this time Watson also was Chairman of the Board of Greenwood Public Schools, a Trustee of Furman University, President of the South Carolina Press Association, and the President of Greenwood’s National Loan and Exchange Bank. Tradition states that Sunnyside was named for and modeled after the home of Washington Irving in Tarrytown, New York.