This former hotel in the textile mill town of Ware Shoals was built in 1923 on a V-shaped lot that intersects with three main streets. As a result, the building assumes a dramatic focal point in town, with its imposing portico and second-floor main entrance gracing the point of the property. The hotel was built by the Ware Shoals Manufacturing Company to host executives and others traveling to do business with the textile mill, but it was also open to the public. Mill workers sometimes stayed in the rooms while waiting for housing to become available, and teachers often rented rooms at the inn. It replaced an earlier frame hotel in a neighboring location which was eventually converted to apartments before being torn down. 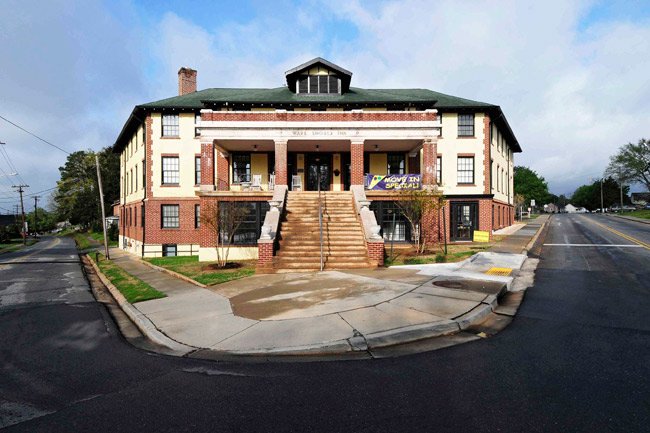 Ware Shoals Manufacturing was more than a mill; it was a community. The textile company was chartered in 1902, but when New Yorker Benjamin Riegel assumed a large interest in the company in 1905, the village around the mill expanded significantly to include schools, churches, the Riegel Baseball Stadium, and the Ware Shoals Inn. The hotel’s place in the community was further secured when Ware Shoals Manufacturing Company shifted its assets to the larger Riegel Textile Corporation in 1946; the inn survived the transfer, but ironically, 40 years after Benjamin Riegel’s tenure, many of the other resources he helped develop – such as schools and churches – did not. The traditional paradigm at many mills shifted during this era, and Riegel Textile Corporation’s directors divested some of its older properties. Still, the community thrived until the mill closed in 1984. 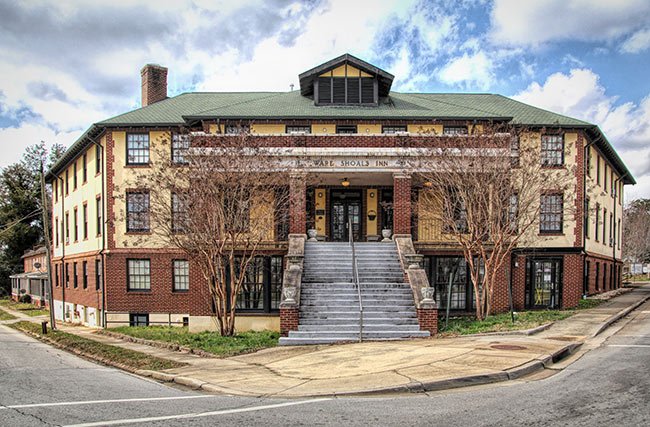 The hotel flourished throughout much of the twentieth century, with businesses holding conferences at the hotel while receptions and other gatherings took place in its dining room. In 1971 the Riegel Textile Corporation sold the inn to a couple who continued operating the business for a few years. When the hotel eventually shuttered, others bought and sold the property until 2006, when it was purchased by Vision Ware Shoals, LLC. The business converted the former inn into living space for senior residents.

The Ware Shoals Inn is listed in the National Register:

The Ware Shoals Inn is significant for its association with the textile industry in South Carolina and for its prominent role in the life of the Ware Shoals community. Built by the Ware Shoals Manufacturing Company in 1923, the Inn served for decades as a center of activity in the village. Even though it was a public establishment, one of the hotel’s principal uses from the beginning was to provide lodging for persons having business with the mill and its employees. The Ware Shoals Inn is significant architecturally as an expression of the textile company’s influence on the design of a building that is not traditionally associated with mill villages. The massing and form are straightforward and efficient, with few features that are solely decorative in nature. Even so, the Inn’s design incorporates elements of the Arts and Crafts movement and Colonial Revival style to set it apart from the manufacturing facilities nearby. The end result is a building that is distinctive from, yet blends well with, its surroundings. The Inn has become even more prominent as a symbol of the town’s past since the destruction of the Ware Shoals Mill buildings. The Inn is a three-story brick building with a partial basement. The modified V-shaped building faces east, with a massive raised porch at its truncated vertex. Exterior walls of the lower level are finished in dark brick, while the upper two floors feature light-colored stucco. This design and the site’s sloping topography enhance the building’s dominance at one of the town’s most prominent intersections. Although the Inn has undergone several renovations and suffered a fire since its construction in 1923, the interior retains a high level of integrity, and the original exterior appearance is virtually intact.