During the discriminatory era of Jim Crow – when governments exercised the systemic practice of racial segregation – many Northern philanthropies worked with rural Southern communities to facilitate better educations for African-American children. Rosenwald Schools were the brainchild of Julius Rosenwald, then-president of Sears and Roebuck, and Booker T. Washington of the Tuskegee Institute. The schoolhouse seen below was known as the Gifford Rosenwald School or sometimes as the Gifford Colored School and is located in the hamlet of Gifford in Hampton County. 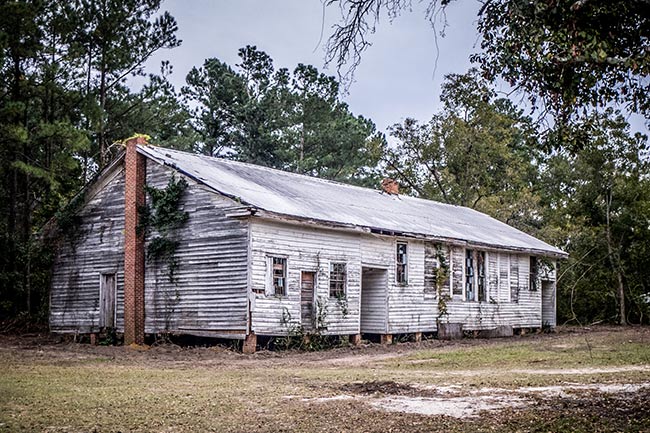 Constructed around 1920, Gifford School was the first of four Rosenwald schools in Hampton County, all of which were thought to have been lost to neglect. It was not until 2012 when researchers discovered the school hidden in plain sight by decades of overgrown vegetation. This vegetation is the very thing that saved the school from vandalism and irreversible decay. When open, the school served grades 1-9 with two teachers and a principal. The Rosenwald Foundation supplied $800 towards its construction. The remaining money came from the community: black citizens supplied $1,795, white citizens supplied $55, and public (tax) contributions supplied $600. 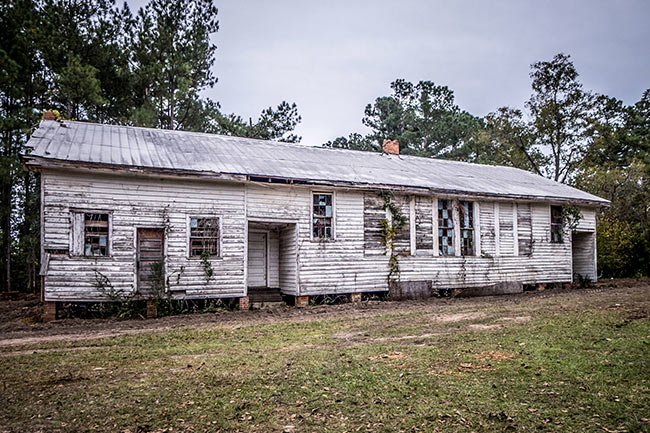 Since the school’s closure in 1958, the building has stood empty. Plans are underway for a complete restoration of the structure. The Arnold Fields Community Endowment is leading the work with many people in the community assisting. An estimated $500,000 is needed to prepare the building for public use. The hope is that it can become a library and technology center for the community.

The Gifford Rosenwald School is listed in the National Register:

The Gifford Rosenwald School, located in Gifford in Hampton County, was listed in the National Register October 4, 2017. Originally constructed in 1920, the design did not conform to the stock building plans for two-teacher schools that were available through the Rosenwald Foundation, but the floorplan is quite similar to the two-teacher “Model No. 4” school detailed in the U.S. Bureau of Education’s 1914 publication entitled Rural Schoolhouses and Grounds. Gifford Rosenwald is significant under Criterion A for its association with the history of African American education in Hampton County from 1920 to 1958. It stands both as a reminder to the history of racial segregation in South Carolina’s public schools as well as the creative adaptation and resistance to this segregated public school system by African American citizens. Black South Carolinians worked to secure educational facilities for their children using the resources available to them. Facilities like the Gifford Rosenwald School offer tangible representation of these efforts to resist a separate and unequal school system, where African American children received less funding and were given fewer resources than whites.