This simple school house in Hampton was built in 1929 to serve local African-American students. The first black school in Hampton was built in 1898, and by 1927 the school board had purchased an acre of land to build a much-needed new school. Three other citizens, including the carpenter who would build this school, bought three additional acres and donated it for the new school in 1929. 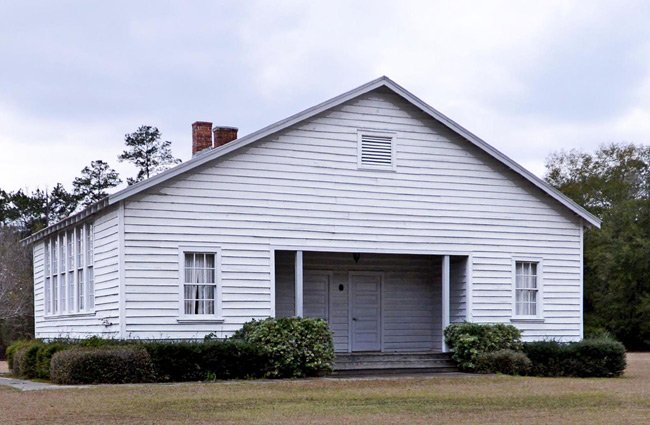 Once enough land was secured for the new school, Ervin Johnson, an African-American carpenter, constructed the frame building with help from local black volunteers. The school served students only through the eighth grade, which was common prior to integration because the state allocated scarce funding for black high schools. Also, the school operated for fewer months than neighboring white schools – only October through March – as funding did not exist to carry black students through an entire school year. The community eventually raised enough money for students to attend for the length of a typical school year. When Hampton Colored High School was built in 1947, this school became its cafeteria. Today it functions as a museum concentrating on African-American history in Hampton County.

The Hampton Colored School is listed in the National Register:

The Hampton Colored School is significant both as an intact example of twentieth century vernacular school architecture and for its association with black education in Hampton from 1929 to 1947. The building is a one-story, front-gable, rectangular, frame building with clapboard siding, tin roof, exposed rafters, and a brick pier foundation. Ervin Johnson, a local black carpenter, built the school in 1929. It replaced the first black school in Hampton, a two-room building which had operated since 1898. The school board bought a one-acre site for the new school in 1927, and two years later Johnson, along with C.H. Hazel and Hallie Youmans, bought an additional three acres and donated them to the school.

Johnson built the two-room (later three-room) school with volunteers from Hampton’s black community. When the school opened for the 1929-1930 school year, it served students from first through eighth grade. Initially funds were so scarce that the school only operated from October to March. Donations from the black community eventually made it possible to operate the school for a full academic year. It remained the only black school in Hampton until 1947, when Hampton Colored High School was built and the Hampton Colored School became the lunchroom for the high school.