The Bank of Hampton has not served as a bank in over 50 years. However, when the bank was founded in 1891, it was the first in town. The historic building, designed by French architect Vincent Fontaine, was completed in 1892. 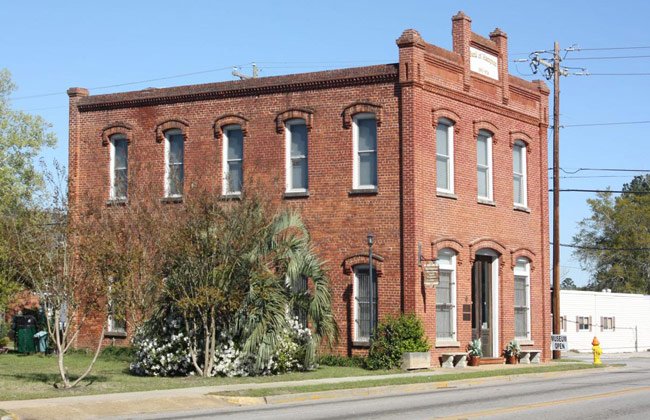 Hampton enjoyed statewide prestige as a financial center in the early part of the twentieth century, thanks to the success of this bank. It also generated revenue by leasing upstairs office space to lawyers. 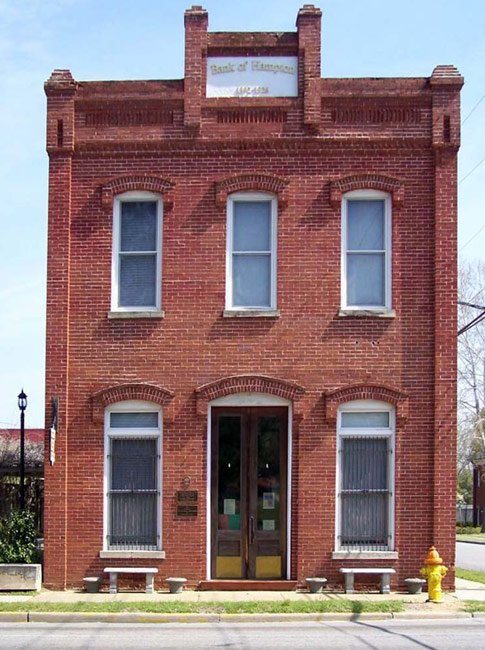 It changed hands in the late 1920s, but by 1930, difficult economic times had fallen upon Hampton as well as the rest of the nation, and this once-influential bank closed. Office space continued to be leased until the 1960s. In 1987 its owners deeded it to the town, and the Hampton Museum and Visitor Center opened here two years later. 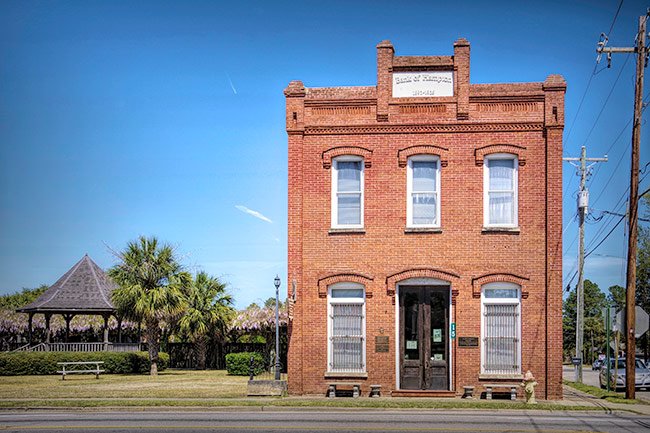 Mary Hughes Calloway of Lexington, 2019 © Do Not Use Without Written Consent

The Bank of Hampton building is listed in the National Register:

In 1891, several prominent citizens of the town of Hampton organized the Bank of Hampton. Purchasing a lot across from the County Courthouse, they engaged architect/builder Vincent J. Fontaine to construct a prominent edifice for the new bank. Fontaine, a French immigrant, studied architecture in Italy before moving to South Carolina in the early 1870s. The two-story Italianate influenced brick building was completed in 1892. The building features segmental arches over door and window openings, and low flat parapets at the side elevations. As the county seat, Hampton had six lawyers by 1883, several of which rented upstairs offices.

Establishment of the bank was an important factor in securing the town’s position as a regional center, and by 1905 Hampton was listed as a “banking town” in a statewide business directory. The Bank of Hampton operated successfully until 1926, and three years later the building was purchased from its receivers by their competitors, The Loan and Exchange Bank. From the 1930s to the 1960s the building was operated as rental commercial space, still maintaining the upstairs law offices. In 1987, heirs of the buildings’ owners gave it to the town of Hampton. The building since then houses the Hampton Museum and Visitors’ Center.

Plan Your Trip: Bank of Hampton