Standing prominently along Pickens Avenue in the town of Fairfax in Allendale County, this train depot was built in the late 1800s. Fairfax was at first little more than a crossroads on the route between Augusta and Orangeburg, marked by Owen’s Store and Bethlehem Baptist Church. By 1870, the first postmaster had been appointed, and the community was called Sanders.

Three years later, in 1873, Port Royal Railroad began operations with an east-west line. The junction was dubbed Campbellton Station. To avoid confusion, the names Campbellton and Sanders had to be consolidated. Several proposed names were placed in a hat, and children of the community drew names with the winner being “Fairfax.” 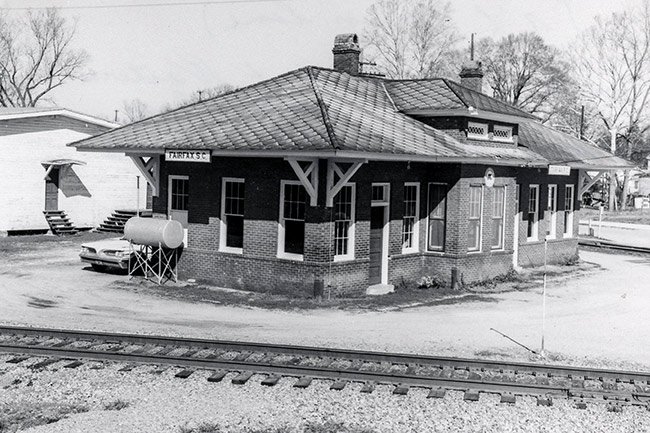 The town’s first charter was approved in 1893, and Fairfax was incorporated in 1896 with W. J. Sanders as mayor. Florida Central Railroad put in a north-south line and, like many small towns near rail lines, businesses boomed. The first brick store was built nearby by F.M. Young; Young ran a telephone company, an electricity generator, and a cotton gin. He also made ice for the community.

His son, F. M. Young, Jr., began wiring homes for Delco generators which spawned an electrical contracting business that in time grew to serve larger operations like businesses and schools. W. J. Young was an esteemed physician whose wife, Virginia Durant Young, was a noted suffragette and author. Virginia operated the local newspaper, the Fairfax Enterprise, in the 1890s. The Youngs left their home and vast collection of books to the Town of Fairfax as a library. Their house is listed on the National Register as the Virginia Durant Young House. They also contributed the seed money for the county hospital, stipulating that it must be built in Fairfax.

Today, trains still roll along both the east-west and north-south lines, but the old depot, like many others across South Carolina, serves another purpose. It is used as a senior citizen community center.