The ornate beauty of this Baptist church in the town of Estill is unusual for a denomination known for its simplicity. Yet this church, embedded with Judeo-Christian icons and even constructed in a symbolic form, stands out not just among other Baptist churches but among most buildings in Hampton County. 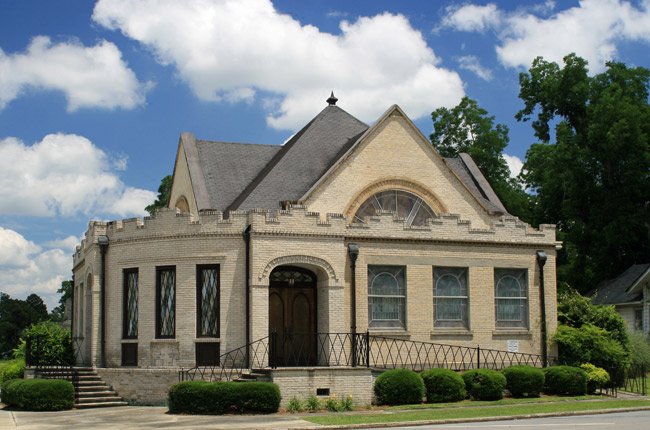 The church was organized in 1775 as Pipe Creek Church for its original location along the namesake creek near the Savannah River. The church moved to the Lawtonville community by 1836 and in 1865 was used as a hospital by Union troops at the end of the Civil War. The congregation changed its name to Lawtonville Baptist Church in 1884. 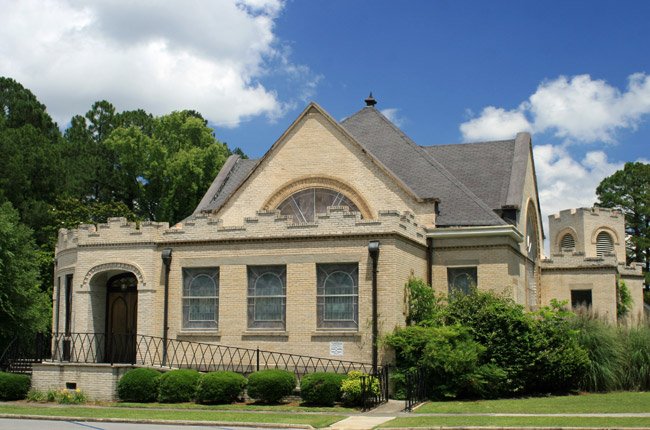 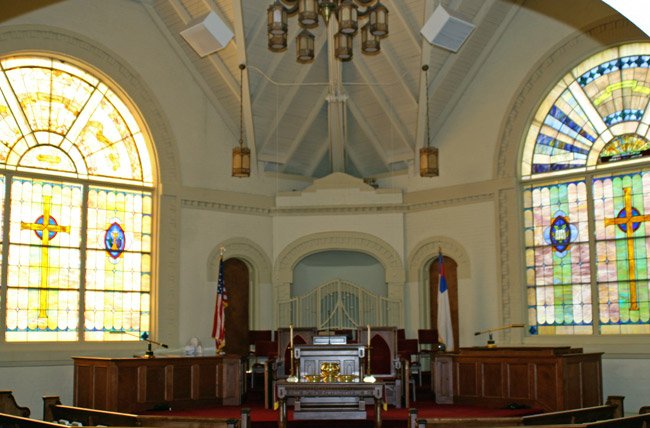 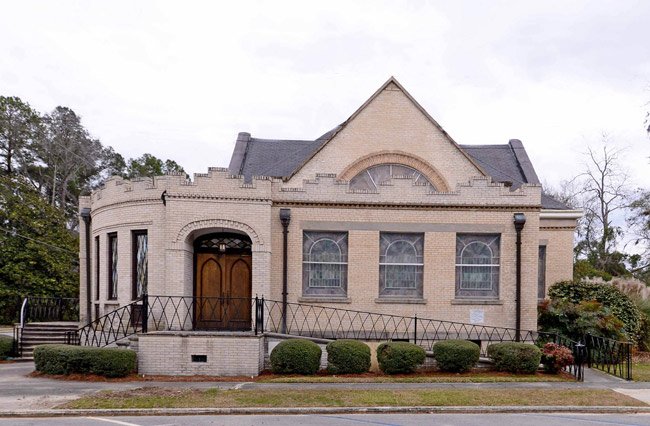 Lawtonville Baptist Church is listed in the National Register:

The Lawtonville Baptist Church, built in 1911, is significant for its stunning and largely intact Late Gothic Revival architecture that is attributed to the regionally significant Savannah architect Julian DeBruyn Kops. Employing a degree of complexity and sensitivity that seems unique not only to churches in Hampton County of the period but also to southern Baptist churches in general, Kops managed to create a house of worship that functioned as an elaborate symbol of Judeo-Christian iconography, beginning with his complex, Star of Redemption pavilion roof, then continuing with the Star of David symbols on the two main approaches to its entrance corner, and culminating in the Alpha and Omega designs that greet church members every time they enter the sanctuary and the portico arch gates whose motif clearly intended to evoke the Trinity.

Rare indeed is the religious architecture of this church in a small, rural, southern town that emphasized such an intricate and weighty connection to the imagery and iconography of early Christianity. The church is a brick building with a complex, asphalt-shingle, pavilion roof with projecting gables, dominant stained glass windows, and an intriguing back entrance that resembles a castle keep. In 1945, the congregation added a Sunday School building to the east of the original church building, as well as a music building addition to the east of that in 1962. Neither building addition is contributing. In 1973, the church completed a remarkably sensitive renovation that closed in the existing sanctuary entrance to create a rounded front and a rain shelter for arriving and departing congregation members, while also preserving the original appearance of this portion of the façade inside the new addition.

Photographer Bill Segars shares his personal history with Lawtonville Baptist Church: “It is not one of the oldest churches in SC, but it’s extremely interesting, maybe an engineering marvel for its time, and it has a special meaning to me. My parents were married here March 14, 1943. My family goes back a long way in Hampton, Charleston, and Jasper Counties, here at Lawtonville Baptist, Presbyterian Church at Edisto, and Robertville Baptist Churches. My given name is William Lawton Segars. Captain William Lawton, my 4th or 5th back grandfather, came from Cheshire, England to Edisto Island in 1748.”