This former cotton warehouse in Estill was built in 1910, five years after the railroad town was incorporated. Land for the building was purchased in 1909 by the Estill Warehouse Company; the following year this 200-by-60-foot brick building was housing cotton awaiting transport along the Seaboard Air Lines Railroad. In 1929 the building, which by then was heavily mortgaged, was bought by C.L. Peeples, Sr., who had owned an interest in the warehouse company. Following Peeples’ death in 1939, the building changed hands several times. During the 1980s and early 1990s, it was owned by the Southern Soya Company, a soybean oil manufacturing facility. Andrew Harper, whose family had owned the warehouse prior to Southern Soya, once again came into ownership of the building and deeded it to the Town of Estill in 1994. 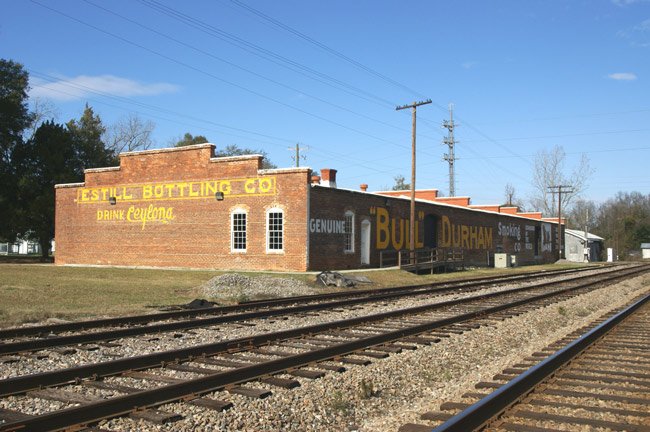 Danny Lucas of Ridgeland, 2007 © Do Not Use Without Written Consent

The building sat vacant for the first 11 years of the town’s ownership. Finally in 2005 the town began to restore the former warehouse. The Live Exhibit Hall and the Palmetto Reception Hall are two spaces within the warehouse used for conventions, weddings, and other gatherings. The venue was named the Bull Durham Center due to the Bull Durham Tobacco advertisement painted along one side of the building. 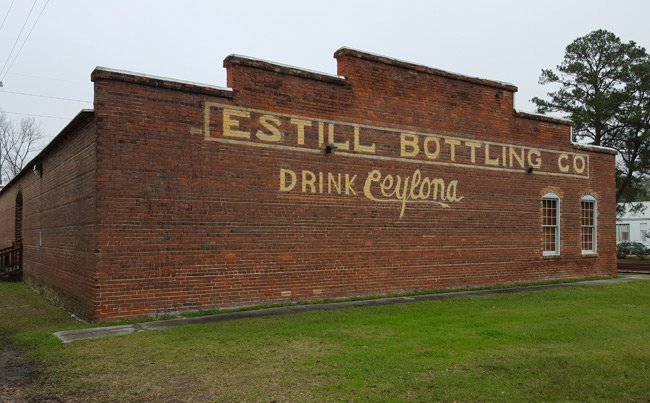 Andy Brown of Aiken, 2016 © Do Not Use Without Written Consent

Another ad, seen above, promotes the Estill Bottling Company as well as Ceylona, a popular carbonated drink once bottled by the local plant. In the early twentieth century, many companies would pay to advertise on the sides of prominent buildings such as barns and warehouses. The lettering on the sides of the Bull Durham Center harks to such a time. Ironically, the Town of Estill became a tobacco-free municipality in 2013; while alcohol is permitted within the Bull Durham Center during special events, smoking is strictly prohibited.

Reflections on the Bull Durham Center