An icon for generations of Sandlappers, the Myrtle Beach Pavilion Amusement Park – simply called the Pavilion – closed in 2006 following 58 years of family-friendly beachside thrills. Investors have tried to fill the void left by the closing and subsequent razing of the park by building new attractions such as the SkyWheel and expanding Broadway at the Beach. However, many consider the Pavilion irreplaceable, and the nostalgia of the Pavilion lives on in the memories of those who grew up riding the amusement park’s 1912 Herschell-Sillman carousel and listening to the Baden band organ, a German pipe organ that debuted at the 1900 World Exposition in Paris.

While many of the Pavilion’s historical attractions such as the carousel and organ have been relocated or preserved, others were demolished after the park’s closing, including the beloved Haunted Hotel and the Hurricane: Category 5 roller coaster. Though there is no shortage of family entertainment in the resort city, the land where swings and coasters once provided people with the state’s best ocean views now sits mostly empty. 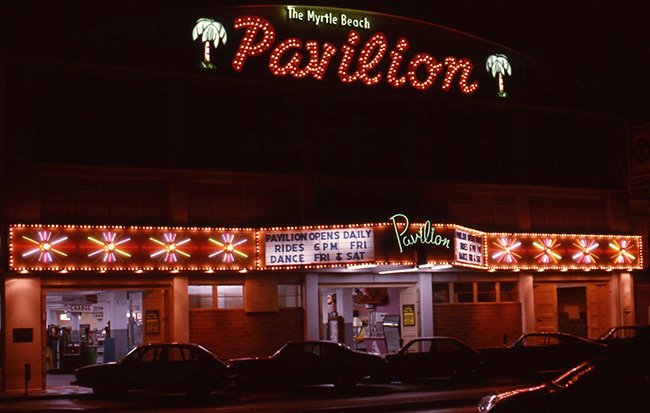 Jack Falat of Pawleys Island, 1975 © Do Not Use Without Written Consent

Yet, any South Carolinian who grew up in the second half of the twentieth century can still recall the sounds of roaring roller coasters and screams turning into laughter that for decades floated through the salty air from the Pavilion grounds. 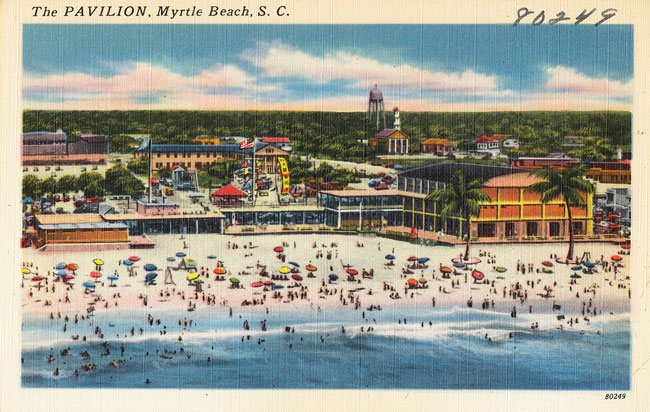 The first pavilion to grace this site was a one-story structure built by the development company Burroughs and Collins in 1908 as part of the Seaside Inn, which is no longer extant. The pavilion later burned but was rebuilt in 1923; this time, the pavilion was two-stories tall. During the 1920s the Myrtle Beach area grew exponentially as a resort town with the addition of places such as the Ocean Forest Country Club and the Ocean Drive Pavilion in North Myrtle Beach. In response to the growing number of visitors to the area, the Myrtle Beach pavilion was enlarged in 1938. 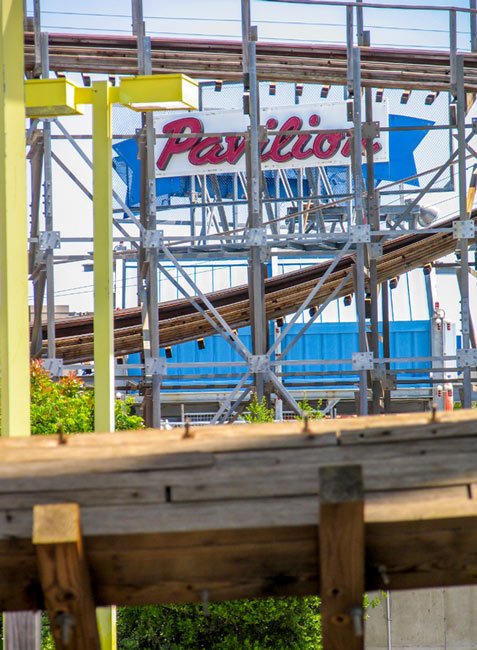 The pavilion burned a second time in 1944 and was rebuilt yet again in 1949, this time of concrete. The year before, the Myrtle Beach Pavilion Amusement Park was built on 11 acres across from the pavilion site. The amusement park developed when a traveling carnival was hosted by Myrtle Beach for its annual Tobacco Festival and ended up becoming a permanent attraction. In 1950 Burroughs and Collins bought the amusement park, and from that point the park and pavilion were collectively referred to as the Pavilion. 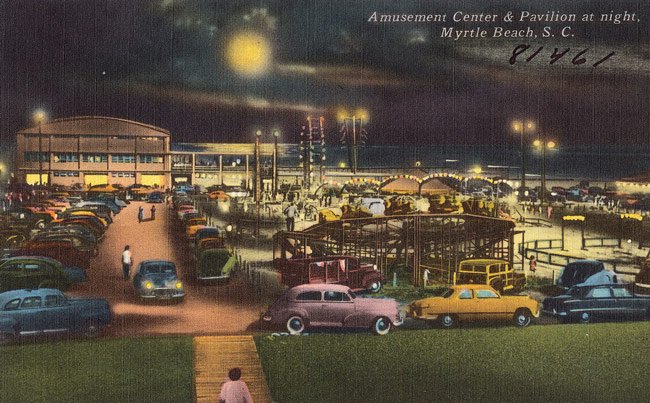 While rides at the park changed regularly, the mainstays of the Pavilion included the aforementioned carousel, pipe organ, and Haunted Hotel along with a log flume, swings, and smaller roller coasters. The park received its first major roller coaster in 1978 called the Corkscrew. Despite the opening of nearby Family Kingdom in 1966, the Pavilion remained popular and continued to modernize with new rides and attractions through the decades. 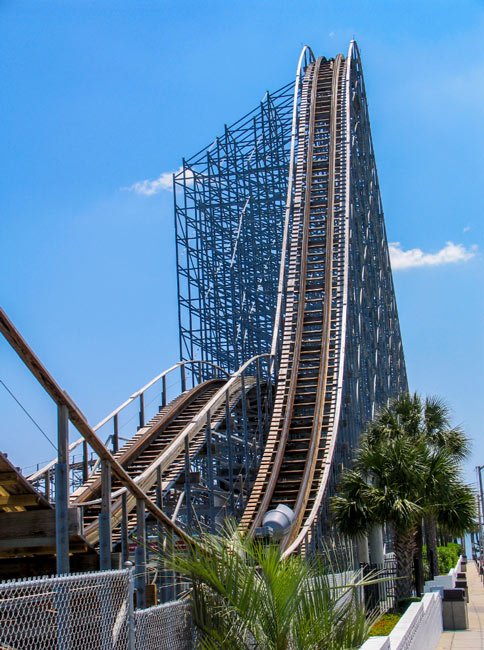 Burroughs and Collins merged with another local business, the Myrtle Beach Farms Company, in 1990 to form Burroughs and Chapin. In the early twenty-first century the company decided to close the Pavilion to make room for real estate development, and the park’s Farewell Season was announced in early 2006. The theme of the Pavilion’s Farewell Season was “One More Ride, One More Thrill, One More Memory, One Last Time,” and the park closed to the general public on September 24th, though a select group were invited to experience the Pavilion once more on September 30th. 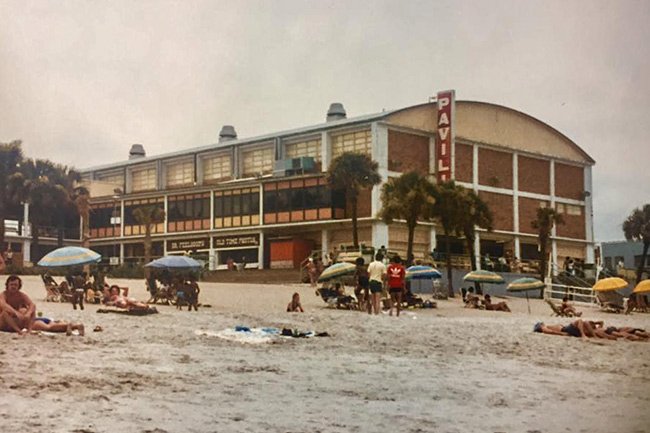 The Baden band organ, which had been moved to Broadway at the Beach, was removed in 2014 for preservation reasons; it is currently stored privately in an indoor facility, and Burroughs and Chapin hope to display it again at some point in the future. The condominiums promised for the Pavilion park grounds have yet to come to fruition due to the recession of 2008; however, in 2012 a zipline was added to the otherwise empty space. Special events are held on the site periodically, though no permanent plans for the Pavilion land have been announced. 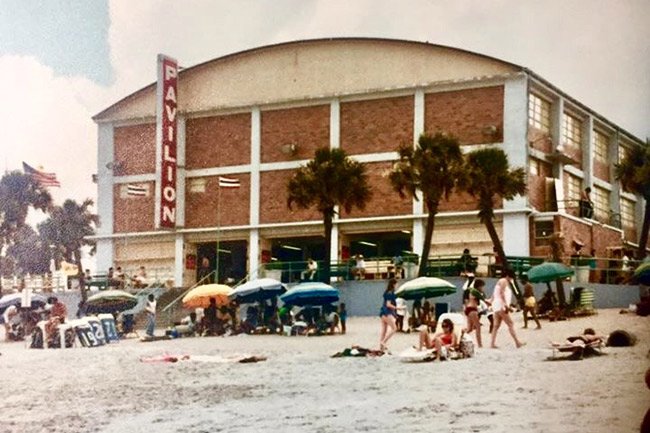 People still flock to Myrtle Beach as sure as the waves continue to crash onto its shores. Older landmarks bring visitors to the most popular beach along the Grand Strand due to their staying power while new attractions are developed regularly. But while laughter and gaiety still punctuate night air of Myrtle Beach, the atmosphere surrounding the vacant Pavilion space rings as hollow as the ghosts of nearly 60 summers past. 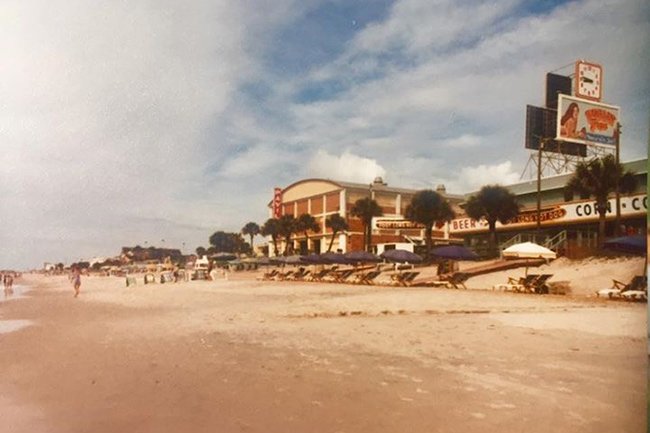 Reflections on the Myrtle Beach Pavilion

Melinda Richardson of Charlotte, North Carolina shares: “On the first floor there were funny mirrors and food vendors. Every night we got soft serve dipped cones (mine was lime!), then walked around before going up to dance. We saw ‘famous’ groups like The Four Tops! We danced, sweated, went out in the cooler air many years there. They should have left it!”

Mollie Walker says: “Lots of good memories. One summer, on break from college, I worked the register at The Twentieth Century Kitchen, across the street from the little amusement park. Couldn’t have imagined way back then that the Pavilion would ever be intentionally demolished. The boardwalk was one of the best ever and it was great hanging out with friends on the big second floor patio watching the world pass by on the boulevard. One day, I was riding along Ocean Boulevard on my bicycle when I got the leg of my bellbottom jeans caught in its chain and hit the sidewalk. The situation was more embarrassing than painful, but quickly turned into a party when a sideshow Frankenstein came to my aid. We drew a crowd while he extricated my pants leg. Love, love, loved that super fun place.”

Dan Hatchell tells us: “I saw Tina Turner [at the Pavilion], who was touring with Ike at the time. It was a cold and rainy night later in the year. There might have been a 100 people there, but it was a stunning show. The Pavilion was the center of the town – the area, really.”