Charles Duckett, a prosperous black businessman from Laurens, built this one-story residence in 1895. The small yet ornate home includes Victorian embellishments such as the Eastlake-design front entrance. The house is reflective of the success Duckett found in running his multiple businesses, including a funeral home and a lumber yard. His lumber company was the only one owned and operated by an African-American in the South at the time. 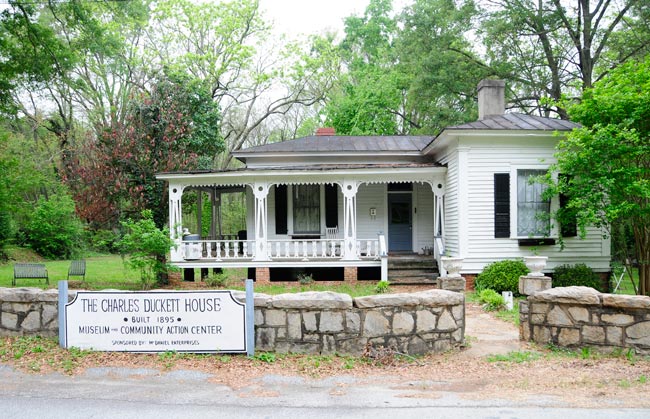 Duckett was also active in the Laurens community, including serving as a lay leader for the historic Bethel AME Church. He lived in the home he built until his death in 1947. His obituary referred to Duckett as “the city’s most outstanding colored citizen.” The house remained in his family until 1975, and today the it serves as a museum and community center.

The Charles Duckett House is listed in the National Register, which adds the following:

The Charles H. Duckett House is significant to the areas of architecture, black history, and commerce for its association with Charlie Duckett (1860-1947), a prominent black Laurens businessman. Mr. Duckett built the house ca. 1892 as his private residence and continued to live there for the rest of his life. He was a carpenter, contractor, and lumber dealer in Laurens during the late nineteenth and early twentieth centuries. In addition to the lumberyard, Duckett operated a funeral home. He took an active part in the civic affairs of Laurens and in the Bethel African Methodist Episcopal Church.

The Charles H. Duckett House is a vernacular, one-story, frame residence with a partial basement. The L-shaped house has a low-pitch, hip roof of standing seam metal and a boxed cornice. The exterior is sheathed in beaded weatherboarding, accented by corner pilasters and a water table. The house is outstanding in its level of ornamentation. Distinctive features include sawn and perforated porch details, paneled ceilings, ornate mantels, wainscoting, carved door and window surrounds, and an Eastlake front door. The home is located in a residential neighborhood that has been associated with the black community of Laurens since its development.