Built by real estate developer Edwin Sitgreaves around 1907, this home in Laurens is unusual for its incorporation of two seemingly disparate architectural styles. The Queen Anne style, popular during the Victorian era, is evident in the home’s ornamental details such as the gables, the tower, and the polygonal bays. However, depsite these embellishments, the home is symmetrical, reflective of Colonial Revival homes that would become popular later in the century. 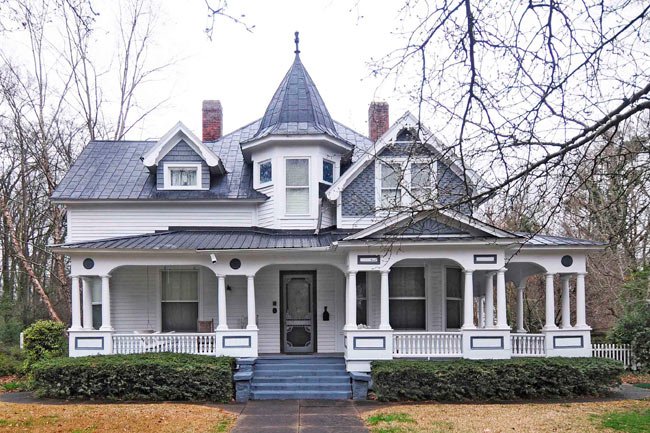 The Sitgreaves House is listed in the National Register, which adds the following details:

Built ca. 1907, the Sitgreaves House demonstrates the transition from the Queen Anne styles to the Colonial Revival style of architecture. Many of the ornamental details of the house such as the tower, bargeboards, porch configuration and balustrade, polygonal bays, and gable ends are reminiscent of the Queen Anne style, but other features, such as the house’s overall symmetry, porch pediment and columns, interior mantels, and placement of the tower indicate the designer’s desire to incorporate elements of the more modern Colonial Revival style. The juxtaposition of the two styles is perhaps best demonstrated in this house by the tent-roof tower.

The Sitgreaves House is a one-and-one-half-story, frame residence sheathed in weatherboarding. It rests on a granite pier foundation. The hipped roof is covered with metal shingles. A hip-roof porch extends across the façade and a portion of the east elevation. The porch features three-quarter length, Doric columns on paneled, wood piers, turned balustrade, ornamental medallions, and gabled pediment with sunburst design in the tympanum. Two, single-story, gabled ells, joined by a lattice-enclosed shed porch, are located on the rear (north) elevation. The house was built as a residence for Edwin Sitgreaves, a real estate developer.