Like so many homes in historic Laurens, the Lyde Irby Darlington House was built at the end of the Victorian era and encompasses various popular styles from that time – such as Eastlake and Queen Anne – as well as the emerging twentieth-century Classical Revival style. The turn-of-the-century proved to be an eclectic period in American architecture as styles overlapped, producing many homes that incorporated several different ones. The neighboring Stigreaves House is another such example. 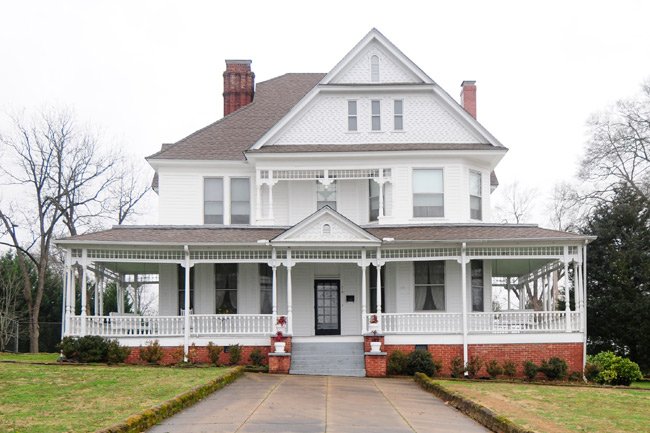 The home was built for Colonel Thomas Dean Darlington and his wife, Lyde Irby, around 1899. It remained in the Darlington family until 1942. The Lyde Irby Darlington House is listed in the National Register, which adds the following:

The Lyde Irby Darlington House is architecturally significant in the city of Laurens as an eclectic, turn of the century residence. Built ca. 1899, the house is an important architectural document of the period when the exuberant Eastlake and Queen Anne styles were losing popularity to the more restrained and sedate Classical Revival styles. The house utilizes elements of each of these styles in its plan and ornamentation. Exterior features of the Queen Anne style include polygonal bays, a wraparound porch, sheathing of weatherboarding and alternate shingles in the gable. Eastlake ornamentation includes the perforated brackets, turned posts, balustrades, and friezes found on the porch and balcony.

The Classical Revival style is represented in the pedimented gables of the house and porch. Three brick chimneys pierce the roof. Interior features include pocket doors, plaster walls, wainscoting, mantels with beveled glass mirrors, coal grates with tile surrounds, and a built-in china cabinet. The house was built as a residence for Col. Thomas Dean Darlington (1867-1932) and his wife, the former Lyde Irby (1873-1934). The Lyde Irby Darlington House is located on a large lot in a quiet, residential neighborhood of the city of Laurens. A molded cement block retaining wall surrounds the front yard and lines the wide front walk.