This historic church in Laurens is the oldest religious sanctuary in the city and one of the oldest in Laurens County. The one-story brick church was built in 1846, the same year the congregation was founded. Its four Doric columns greet parishioners, and a bell in the frame belfry calls members to worship. The stately edifice is considered one of downtown Laurens’ most iconic landmarks. 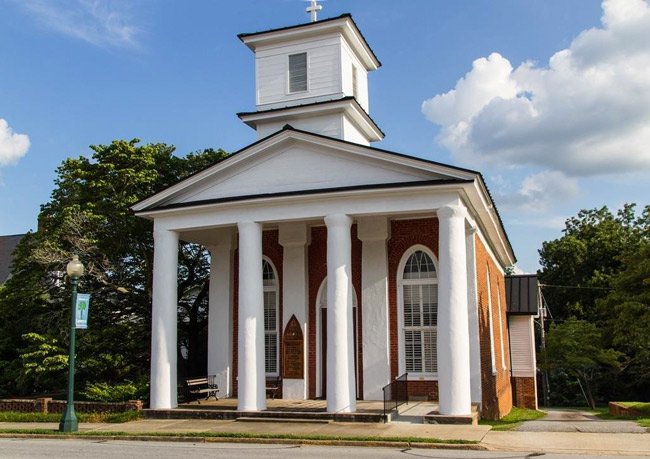 Though the sanctuary was restored in 1983, this church is unusual in that the same building has been in continuous use since its construction. An addition to the church was built in 1973, giving the congregation an education building, fellowship hall, and office space. In the 1990s the church acquired surrounding property and established a churchyard on the premises. The Church of the Epiphany remains active and belongs to the Upper Diocese of South Carolina.

The Church of the Epiphany is listed in the National Register as part of the Laurens Historic District:

The Laurens Historic District contains 111 contributing properties, most of which were built between 1880 and 1940. The town of Laurens is the county seat of Laurens County, located in the Piedmont region of the state. The district includes the public square with the courthouse and surrounding commercial buildings, and extends to the north and west to include significant residential sections of Laurens. The district is an unusually intact collection of buildings of nineteenth and early twentieth century vernacular architectural design mixed with simple high-style examples. Although originally lined by antebellum residences (only two of which remain intact) on multi-acre lots, West Main Street experienced two periods of major development. The first period was from ca. 1885 to ca. 1915 and the second occurred between the World Wars. The buildings in the district display a wide range of architectural styles including Greek Revival, Gothic Revival, Queen Anne, Colonial Revival, Romanesque Revival, Bungalow, Craftsman, Spanish Colonial Revival, and Neo-Classical. The area is also characterized by its large trees, well-kept yards, and granite retaining walls. The town and county of Laurens are named for South Carolina Revolutionary War patriot Henry Laurens. Laurens County was one of six counties created in 1785 from a division of the old district of Ninety-Six. By 1792 Laurens was the county seat.

Church of the Epiphany Map