This pink Victorian-era house in the Eastlake design was built in 1892 in historic Laurens. The original owners were J.J. Wilson, Jr., and his wife, Toccoa Irby Wilson. It was left to their daughter, Azile Clary, in 1908 and remained in the family until 1940. In 1943 it was purchased by Ella Boyd Crisp and stayed in the Crisp family until 1983. 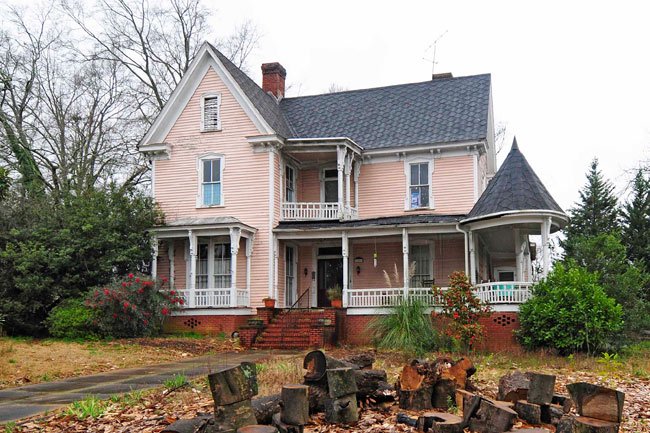 The Wilson-Clary House, also known as the Crisp House, is listed in the National Register, which adds the following architectural details:

(Crisp House) The Wilson-Clary House, built ca. 1892, is a vernacular Victorian residence that utilizes some elements of the Eastlake style. Exterior ornamentation on this house in more restrained than on homes typically utilizing Eastlake elements (such as Laurens’ Dr. W.C. Irby House and the Lyde Irby Darlington House). Notable exterior features include a tent roof gazebo, pedimented window surrounds, attic vents with scalloped louvers, and sawn brackets. The house was built for J.J. Wilson, Jr. and Toccoa Irby Wilson on a lot acquired from Mrs. Wilson’s brother, Dr. W.C. Irby. The two-story frame residence is sheathed in weatherboarding. Two brick corbelled chimneys pierce the cross-gable roof, which has a boxed cornice with returns and sawn brackets. A single-story wraparound porch extends across a portion of the façade and a portion of the north elevation. A tent roof gazebo is attached at its vertex. The main entrance is centered and has double doors and a transom. The interior is distinguished by the ceiling medallions and cornice, a marble mantel, and an elaborate staircase.