Downtown Laurens is home to this Italian villa named for two influential South Carolina families. Colonel John Drayton Williams hired noted local architect Dr. John Wells Simpson – who also designed the Laurens County Courthouse – to create the home he would call the Villa in 1859. The Villa was constructed by slaves. 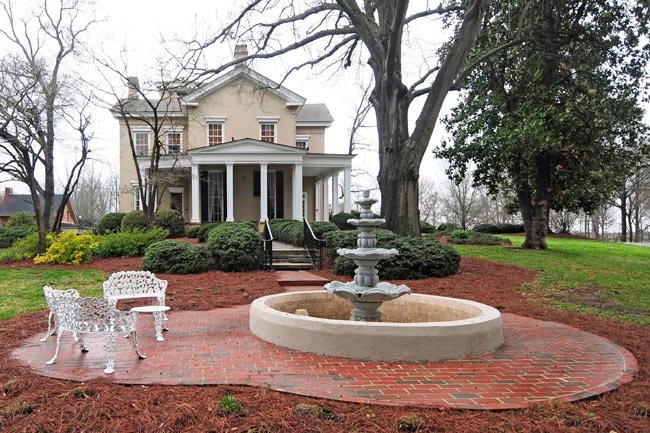 Colonel Ball’s son, William Watts Ball, later owned the house as well as the newspaper and went on to edit other significant South Carolina publications such as The State in Columbia and the News and Courier Charleston. He later authored a book on South Carolina titled, The State That Forgot. Colonel Ball’s daughter, Sarah Ball Copeland, was born in the Villa and lived here until 1954. She edited the Laurens Advertiser alongside her brother. In 1959 the home was bought by preservationist Clyde T. Franks, who restored the Villa. It was used as a residence for several more years before a retirement village was built behind it. Today the home is owned by the Martha Franks Baptist Retirement Community and is used as an event facility.

The Williams-Ball-Copeland House is listed on the National Register, which says the following:

(The Villa) The Williams-Ball-Copeland House is significant for the contributions made by four of its former residents, John Drayton Williams, Beaufort Watts Ball, William Watts Ball, and Sarah Ball Copeland, to the fields of publishing, politics and government, and civic work. The house is an outstanding example of the Italian Villa style of architecture. Built ca. 1859-61 as a winter residence for Colonel John Drayton Williams (1798-1870), the house was one of at least four in the city of Laurens built in this style; it is the only one that remains intact. The contractor for the house was Dr. John Wells Simpson, who employed skilled, slave artisans in its construction. Dr. Simpson also built the Laurens County Courthouse. John Drayton Williams and Beaufort Watts Ball, the first two owners of the house, were active in state government.

Williams served as a member of the South Carolina House of Representatives, and the Southern Rights Convention of 1852. He was also a member of the Secession Convention and a signer of the Ordinance of Secession. Ball was a member of the South Carolina Constitutional Convention of 1865 and a State Representative. Ball’s children William Watts Ball and Sarah Ball Copeland were editors of their father’s newspaper the Laurens Advertiser. W.W. Ball later served as editor of The State and The News and Courier. Sarah Ball Copeland served as Chairman of the Library Board of Trustees for twenty-seven years. The house is a two-story brick residence that is stuccoed and scored. The house is situated on the crest of a prominent hill in the western section of the city. To the north of the house are two, small, brick outbuildings which date from the same period as the house. One was originally the summer kitchen and the other was a combination smokehouse and food storage house.