This painting was created in 2000 as part of a fundraiser for a local church. It was purchased by contributor Jacqueline L. Roper, who provided the painting and much of the information on this page. We appreciate both very much!

Cross Hill High School was built in 1920 with 12 classrooms and an auditorium. It served white students, who attended the school until consolidation in the mid-twentieth century. It then became a grammar school, and high school students attended school in neighboring Clinton. 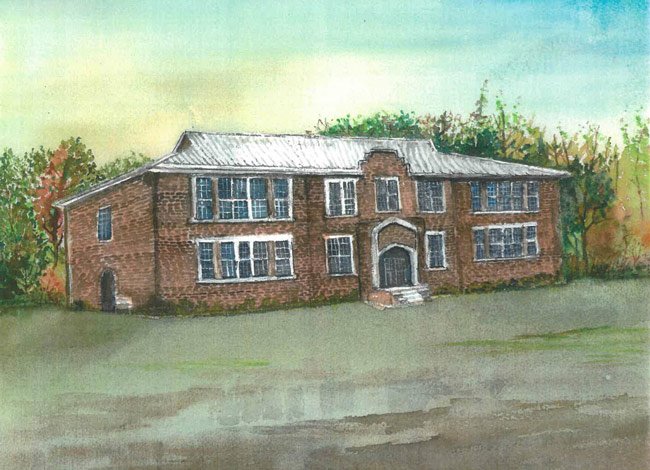 Sarah Gray of Cross Hill, 2000 © Do Not Use Without Written Consent

“There were four classrooms (when it operated solely as a grammar school): the first and second grades; the third and fourth grades with the fifth grade; the sixth grade was split between two teachers in two rooms, and the 7th grade was taught by the principal. The boys’ and girls’ playgrounds were separated, but we girls loved to go to the water fountain, which was in the boys’ half. This school is dear to me, and the last time I visited it, it was in decline but still standing.”

Roper goes on to share: “When it was both a high school and grammar school, all the classrooms were used and the historic information confirms this. When I went to school there, it was only a grammar school, and after the seventh grade, we were bused to Clinton. The upstairs of the building was not used for a long time, but at some point (and I can’t remember exactly) about two classrooms were converted into a kitchen and lunch room where we students were at last privileged to have a hot lunch. Mrs. Sam Leaman consented to be the dietician and manager. We had wonderful meals there, and before that none of us students had ever been allowed upstairs (unless someone sneaked up there, and I never knew that anyone did). Pretty much, we were a very disciplined bunch of students.

“We had wonderful teachers, and each year at Christmas, the entire student body participated in ‘A Christmas Play.’ To get all the students involved, we had the main characters, and all the other students were elves, angels, etc. One year we were all kinds of fruits, and my group were oranges. I remember that my costume was a piece of orange fabric with loose elastic around my neck and loose elastic about my legs. There were probably 12 oranges, and we all came out together and twirled around. All four teachers, including the principal, worked with us students for the play every year, and it was such an exciting event. One year I was the little girl who did not believe in Christmas, the main character. I was supposed to cry – and I did – but then I couldn’t stop, so that created a real problem.

“I am now 76 years old, and those memories are just so comforting to me. The whole town turned out for ‘the play,’ and all the moms and grandmothers gladly made the costumes. We wore makeup to make us look good on stage, and there was no sound system. I suspect that had a lot to do with my being chosen twice to be the lead in the play. I have always had a very loud voice.”