Gray Court-Owings School was founded in 1902 in the Laurens County town of Gray Court, where students originally met in a small frame schoolhouse. By 1914 this brick Classical Revival building had supplanted the first structure and accommodated students in grades one through nine. A tenth grade was added in 1921. 1928 saw the addition of the grand portico, and that same year two one-story flanks were constructed on either side of the main building: one was for use as a high school, the other an auditorium. 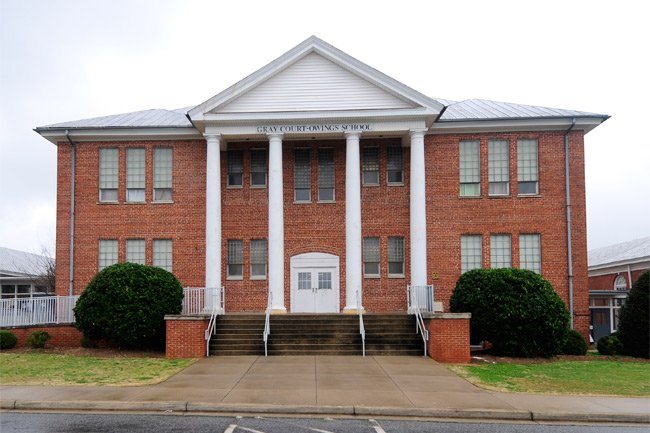 The enlarging of the school is significant in that it kept up with the expansion of rural education in the early part of the twentieth century. By 1949 all twelve grades were housed on this campus. Also reflective of the area is the addition of a potato house in 1930, a small one-story building added to the campus for farmers to use in storing their harvests. Classes such as animal husbandry were taught alongside reading and arithmetic, and students often helped local farmers plant crops.

Today Gray Court-Owings School houses both an elementary and a middle school in its modernized complex, though little has changed regarding the exterior of the first few buildings.

Gray Court-Owings School is listed in the National Register, which says the following:

The Gray Court-Owings School is significant as an excellent and largely intact example of Colonial Revival style school architecture in the upstate and for its association with the growth and development in education in northern Laurens County in the first half of the twentieth century. The Gray Court-Owings School is a two-story central brick building constructed in 1914 with a flanking one-story brick-veneered high school building to the north and a one-story brick-veneered auditorium to the south, both built in 1928. When the flanking buildings, designed in the Colonial Revival style with Tuscan order porticos, were added in 1928, a two-story portico of the Tuscan order was added to the entrance of the 1914 building.

Originally designed in the Renaissance Revival style with baroque massing, the building assumed a Classical or Colonial Revival appearance with the addition of the 1928 portico. The main building is accessed by a monumental stair with flanking wide cast stone-capping cheek walls. Each building has a hipped metal roof. In the 1930s a one-story frame potato house was built to help local farmers preserve their crops. This outbuilding contributes to the historic and architectural character of the property.