The community of Dalzell occupies fewer than six miles of Lee County. Yet when St. Philip’s Episcopal Church was founded in 1840, the area was an active summer district for residents of the Lowcountry who wanted to escape heat, humidity, and the threat of malaria. 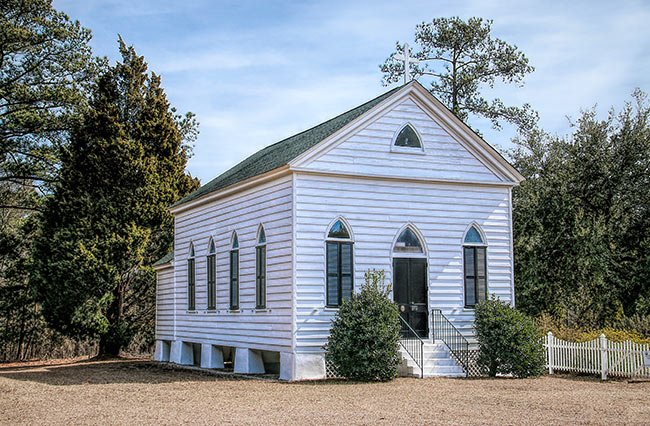 St. Philip’s was formed in the colony known as Bradford Springs in the upper portion of the High Hills of Santee. The land on which the springs flowed were granted to Nathaniel Bradford in 1785. Over time, the springs became a popular tourist spot, and bathing houses were established as early as 1817 so visitors could enjoy the springs’ purported healing properties. 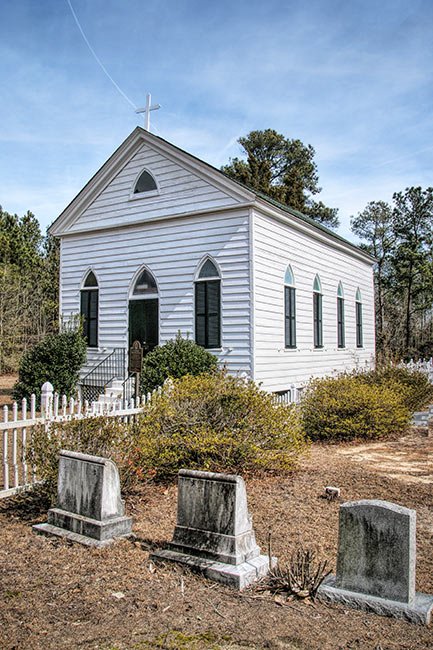 By 1840 the community was large enough to establish an Episcopal church, and St. Philip’s was organized. The building was completed in 1841 – adjacent to the springs – and in 1846 the church received its first permanent rector, the Reverend Charles Pinckney Elliott. Sadly, Reverend Elliott suffered a fatal accident five years later when a tree limb fell on him during a tornado. The marble obelisk in front of the church was erected by his congregation in his memory. He is buried in the churchyard. 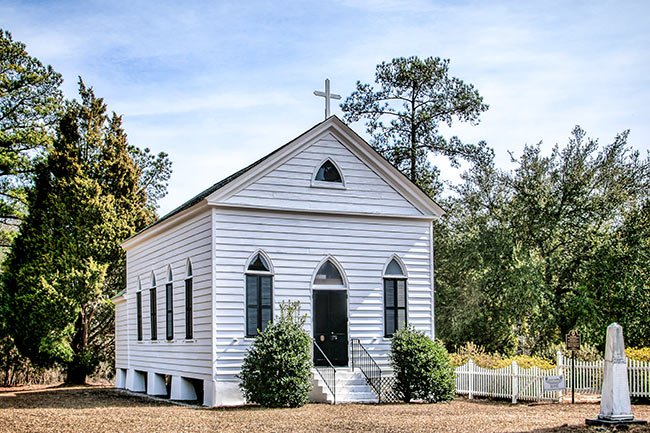 Batterup55 of Wikimedia Commons, 2015 © Do Not Use Without Written Consent

After the Civil War people stopped traveling to Bradford Springs, and the once-thriving summer colony could no longer be sustained by its few permanent residents. Today the area is another post-war rural community in South Carolina.

St. Phillip’s is no longer in use but is listed in the National Register:

St. Philip’s Episcopal Church, built in 1840, is significant as an excellent example of vernacular Gothic Revival church architecture and for its association with the popular antebellum and postwar summer colony of Bradford Springs. The church is a tangible link to the once-bustling, mid-nineteenth century community of Bradford Springs, located in the “High Hills of the Santee.” This area was a summer resort for planters and their families seeking refuge from the heat and malaria of the lowcountry and the midlands. Such families as the Sumters, Gaillards, Porchers, Stoneys, Frasers, Colcloughs, Capers, and Tates often spent from April to November there.

The meeting house-form church is a one-and-one-half story Gothic Revival building with a gable front and clad in weatherboard. It rests on piers of native stone and clay mortar (those on the perimeter are covered in stucco). The double front door and the 9/9 sash windows throughout the building are capped by pointed arches. The rear elevation has a gable end addition used for robing. The interior is as simple in design as its exterior. The church is entered through a small narthex which has stairs leading to the small balcony. The sanctuary has a simple dado and a plain painted plaster field. The cemetery adjoining the church dates to the founding of the congregation and is surrounded by a picket fence.

Below is an article that was contributed to the South Carolina Picture Project by Bill Segars of Hartsville. It originally appeared in his local paper, The Darlington New & Press. It was published in August of 2015.

Before we begin our church this week, I’d like to thank the many readers of these columns for their response to the previous articles and for allowing me to venture out of Darlington County from time to time. There are so many interesting old churches in neighboring counties that I would be remiss if I didn’t include those as we learn together. If at any time you have comments, feel free to contact me at billsegars@gmail.com. 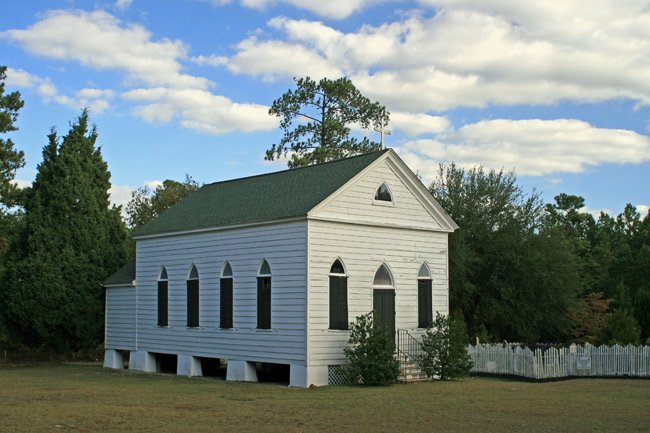 The story of the church cannot be told without talking first about Bradford Springs. If you think that our summers here are almost unbearable, other places in South Carolina are worse. The now-extinct community of Bradford Springs first began in the early 1800s as a summer and autumn get-away for the families of large plantation owners from the Santee River area of Clarendon, Berkeley, Williamsburg and Georgetown counties. Farmers with names such as Gaillard, Porcher, Stoney, Boyd, Colclough, Burrows, Fraser, and many others would bring their families and servants here to escape the malaria air of the low-lying river land. They built either small cottages or large houses with names like “Leamington”, “Rose Hill”, “Pineville”, “Capers Hall” and “South-Mount”. General Thomas Sumter spent his later years at “South-Mount” where he died in 1832 at the age of 98. These houses were scattered throughout the countryside within a several mile radius of Bradford Springs. The initial draw to this area was the availability of the many cool, fresh water springs found here. One of the strongest springs was found on a 1,358-acre tract of land owned by Nathaniel Bradford, hence the name Bradford Springs.

As word spread of the healthy water and air here, more people began to vacation here. With more prominent and affluent people gathering, entertainment also came. Dinner parties, suppers, dances and other social events where held at the various houses. Various businesses sprang up to supply the needs of the vacationers. Due to the fact that the stage coach road from Camden to Charleston went through Bradford Springs, a 30-room hotel was built here for travelers. The area was growing and prospering very quickly. 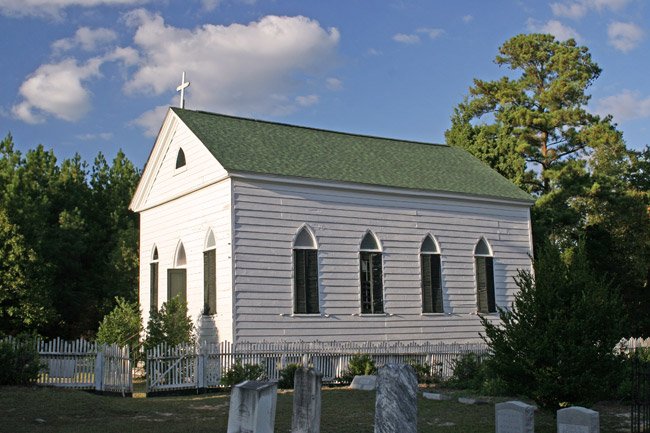 In an attempt to become a year-round community, Bradford Springs became known as an educational center. After the death of Henry Britton, the hotel owner, in 1846, Jenkins J. DuBose bought the building and converted it into a girls’ school. In 1853 a Presbyterian minister, the Reverend Gilbert Morgan, bought the school and changed the name to Harmony College, where he enrolled as many as 120 students. With this many full-time students, the need for more buildings arose. A stone dairy building, several music studios, houses for teachers and spring houses were built to meet the needs of the school. A school for boys was also built about a mile from “downtown” Bradford Springs. The future was looking up for Bradford Springs.

Many of the summer residents were strong believers of the Episcopal faith. At this time the closest established Episcopal Church was Church of the Holy Cross, sixteen miles away in Stateburg (Keep that name in mind, you may see that again). The Episcopal term “Chapel of Ease” means it was easier for the locals to build their own church building and ask the one preacher to come to them than the many of them to go to an established church. On September 15, 1840 Henry Britton deeded two acres of land to the vestry of the Episcopal Church for the purpose of erecting a church. Work began immediately to clear the land of its long leaf pine trees (Pinus palustris), saving and sawing the timber for use in constructing the 26 foot wide by 42-foot-long Carpenter Gothic building. Like many small Chapel of Ease church buildings, the construction process was a community effort. Men who had talents: carpentry, stone mason, cabinetry or labor gave of those talents. Others gave of their money to assist in the construction efforts. When it was finished, it was complete with Gothic double hung windows, alter, pulpit, pews, chancel railing and a marble font. 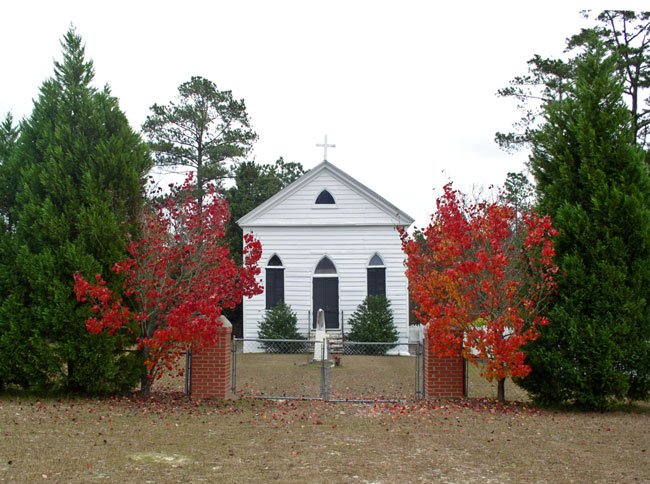 It was decided by the group that the new house of worship would bear the name of St. Philip’s. Mrs. Ellinor McBride donated her large 1806 Bible, which is used now, when a service is held here. On June 9, 1841, St. Philip’s was consecrated by the Bishop of the Diocese, the Reverend Christopher Edward Gadsden. The first person baptized here was Musidora Isabel Colclough in 1843. The first marriage was Miss Mary Porcher to the Reverend Christopher Gadsden on July 31, 1849. The first burial in the graveyard was John Ashby Colclough. As with Bradford Springs, St. Philip’s was growing; the future was looking up for St. Philip’s.

Unfortunately, the future is not always as rosily as it appears. The demise of Bradford Spring did not occur during The War Between the States; it was spared the devastation of war, but failed as a result of the war. Plantation owners could not afford to make the trip to their vacation homes. Some homes were abandoned, some were able to be sold, and some fell or burned due to neglect. Families could not afford to send their children to school, so the schools closed. The hotel/school accidentally burned in 1863. As quickly as Bradford Springs rose to prominence, from the early 1800s to 1862, everything was gone just as quickly with the accidental burning of the last house in 1924 – except St. Philip’s. This lovely little building is the only remaining evidence of the once prospering community of Bradford Springs.

The Reverend Joel Osborne says “I had the joy of making the steel Celtic Altar Cross as a gift to the Church for the kindness of John and Sarah Dawson, who rest in the cemetery.” The Celtic Altar Cross can be seen in the photo below. 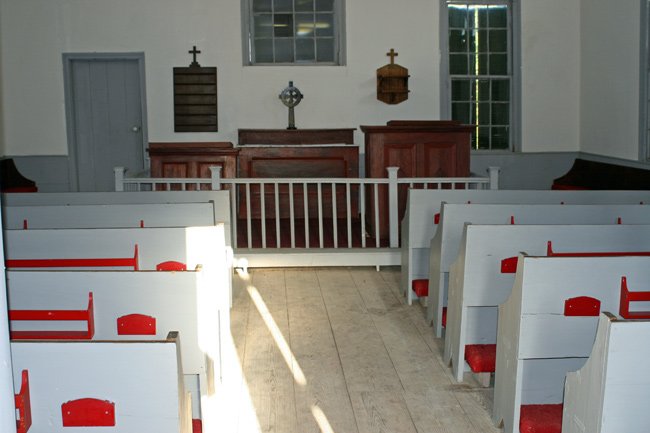 So what has happened to St. Philip’s since its heyday? It was closed after the war due to sparse attendance. Several attempts have been made to establish it as a “real church” with a congregation, with no success. A few occasional special worship services, family reunions, weddings or funerals have been held here; still no full-time congregation. You may ask then how does it continue to exist, who keeps it up? Plain and simple: people who love it. Descendants of the founding members with names like Colclough, Burrows, Williams, Dawson and their families and many others who love the little church. All that is asked of you is to visit St. Philip’s, stand with it and help it remember its enjoyable past.