Also known as the Gregg House, this Greek Revival residence in Bishopville was built in 1847 by Thomas Fraser, a farmer who moved to the area in the early 1840s. Fraser died around 10 years after he built his home, and it was sold in 1867 to Reverend William Gregg. Reverend Gregg serve as the minister at Bishopville Presbyterian Church from the 1860s until 1904. 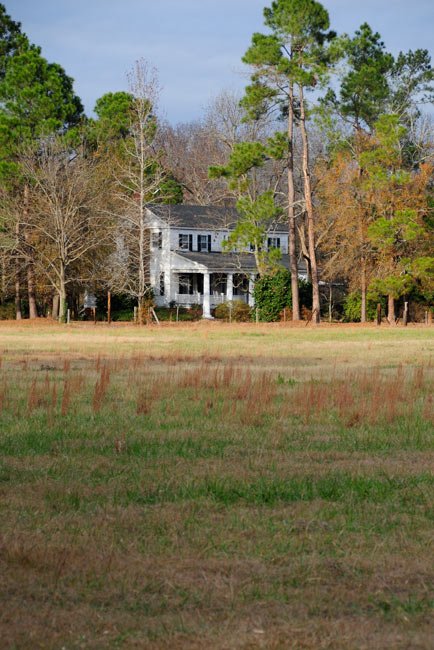 The Thomas Fraser House is listed in the National Register, which adds the following architectural details:

Built in 1847, the Thomas Fraser House is notable example of the vernacular Greek Revival style and is associated with several notable families of Bishopville of the nineteenth and twentieth centuries. The two-story house has a gable roof, weatherboard siding and a brick foundation. The main façade features a one-story porch supported by six round brick and stucco columns with prominent bases and Doric capitals. Behind these freestanding columns is a frame porch with a rectangular railing and spindles.

Thomas Fraser was born in 1798 and moved with his family to Bishopville during the early 1840s. Fraser was a farmer and he constructed this house in 1847 according to family tradition and a date carved in one of the chimney bricks. Fraser died in the late 1850s and this property was sold by the family in 1867 to Reverend William Gregg. Gregg was the minister of the Bishopville Presbyterian Church from the 1860s until his retirement in 1904. At the rear of the house is the original kitchen which was remodeled ca. 1900 into a farm office. This one-story building has a porch with milled balusters and round columns.