The county seat of Lee County was originally called Singleton’s Crossroads after William Singleton purchased 465 acres here in 1790. Singleton and his wife then opened a tavern at the intersection of present-day Church and Main Streets, which was a stop along the stagecoach route from Georgetown to Charlotte, North Carolina. Singleton died in 1798, leaving the land to his wife, who died in 1820. Jacques Bishop then purchased the acreage in 1821, giving the area, which at the time was mostly an undeveloped forest, the name Bishopville. 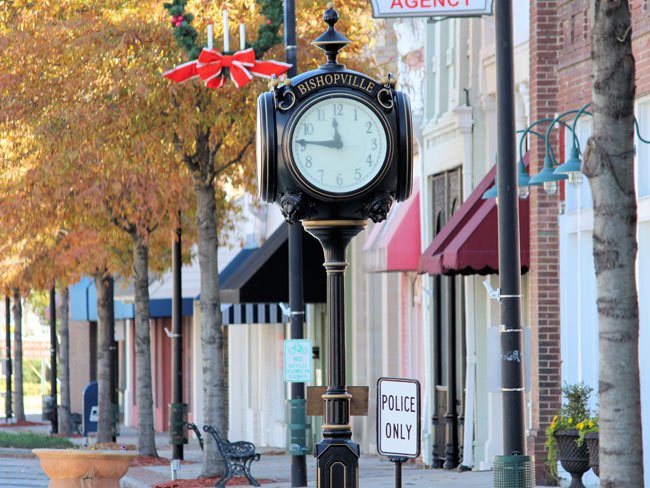 Throughout the following years people eventually built more homes in Bishopville, and the area known for its fertile soil became a mecca for cotton planters. Lee County was created in 1902, and as the county seat, Bishopville has played host to a variety of downtown businesses and entertainment venues, including the Bishopville Opera House and the South Carolina Cotton Museum. Bishopville also hosts the annual Cotton Festival each year in October. The city’s town clock, seen above, keeps people on track as they stroll about through “The Garden Spot of the Carolinas.”