This house in Bishopville was built as a one-story Victorian cottage in 1903. At the time the house contained just four rooms. Owner William James added the second story in 1911 and altered the home’s appearance to that of a Classical Revival-style house. Some architectural details, such as bead board siding on the front porch, reflect the fashion of turn-of-the-century homes in Lexington County, where Mrs. James was from. 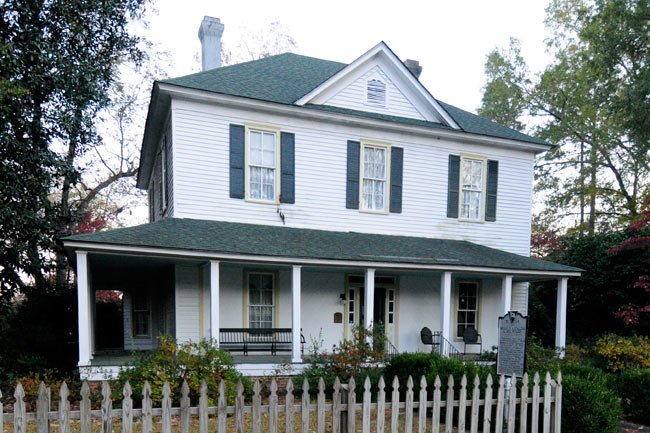 James was a businessman who founded the Farmer’s Loan and Trust Company, where he acted as president for more than 20 years. He helped define the boundaries of Lee County when it was established in 1902 (it previously had been part of Sumter County) and headed the commission to build its first courthouse. He also served on the Lee County school board and in the South Carolina House of Representatives from 1913 until 1914. Today the house belongs to the Lee County Historical Society. 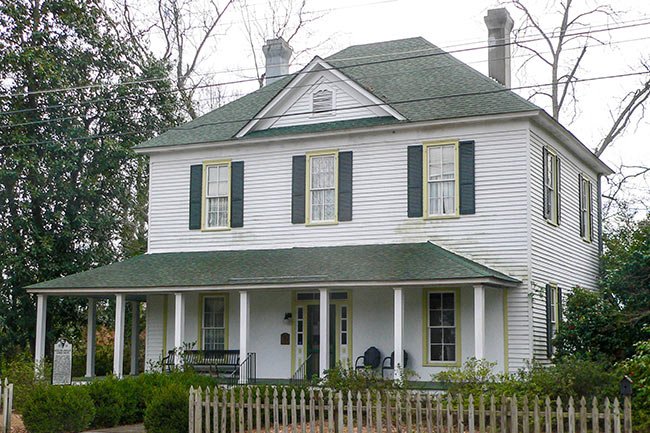 The William Apollos James house is listed in the National Register:

The William Apollos James House, built in 1903 and substantially altered in 1911, is significant as an example of an early twentieth-century vernacular rendition of a Colonial Revival style residence which grew from a modest Folk Victorian cottage. The house was built in 1903 as a lateral-gabled, one-story Folk Victorian cottage with a center gabled dormer. It was occupied by the James family in January 1904. A second story with hip roof, as well as a hip roofed wraparound porch with boxed classical piers, was added in 1911.

The house follows the standard central-hall with four-over-four pattern of rooms. The front door, which is original, is framed by a three-light transom and three lights along each side with square and rectangular underpanels. It is also significant for its association with William Apollos James (1857-1930), prominent state representative, agriculturalist, businessman, and community leader of Lee County. Important too is the collection of historic and interesting flora contained within its ornamental and fruit garden. The house is situated in a setting of mature trees and shrubs, and the historic landscape contributes to the significance of the property.