The City of Marion boasts the state’s first tax-supported public library. Its story started when a young lawyer named Charles Woods, joined by friends H.C. Graham and William Murchison, hosted a meeting to encourage the library’s formation. To jump start the effort, Woods and his wife pledged $500 in initial funding and $1500 over five years for maintenance. The idea was welcomed by other citizens, and a drive began to enroll members at $3 per year. On January 13, 1898, the group was granted a charter by the State of South Carolina to form the Marion Public Library. 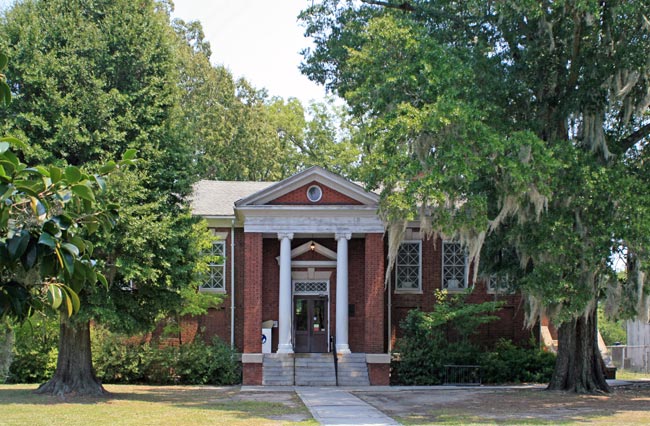 The library did not receive government funding, however, until 1903, when the town allocated $250 a year to maintain the facility, which at that time was located on the second floor of the Bank of Marion. The town also established a $6,000 endowment whose interest would support the library as well. 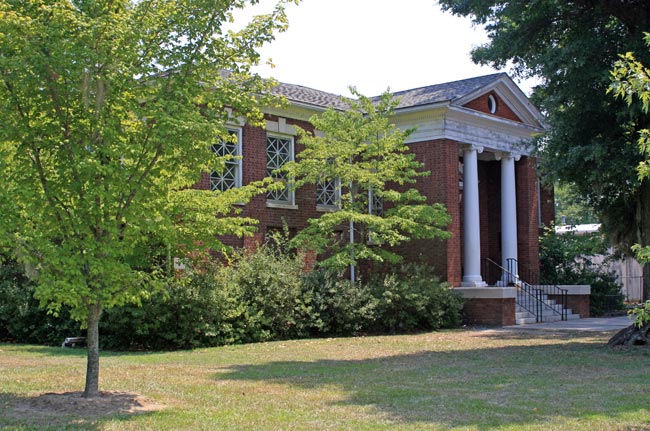 The town’s first librarian was named Kate Lilly Blue; she was seceded in 1904 by Emma L. Salley, who organized the collection using the standard set forth by the American Library Association – including the Dewey Decimal System. That same year, a grant was requested from the Carnegie Foundation, and by 1905, the town had received $7,500 to construct an independent library building.

Begun in 1883 by business magnate and philanthropist Andrew Carnegie, the Carnegie Foundation established libraries all over the world. From 1883 through 1929, 2,509 Carnegie libraries were built and made available to the public – 1,689 in the United States alone. The Marion Public Library was completed in 1905 and is noted for its Flemish bond brick work. It is one of 14 Carnegie libraries built in South Carolina between 1905 and 1916.

In keeping with Carnegie rules, the town again allocated an annual stipend to support the library. The library continued to grow, and in 1913 one of the state’s first bookmobiles was incarnated here as a mule-drawn wagon delivering books to the rural corners of the county. This system was sponsored by Mr. Woods, who by then had become a Circuit Court judge.

Sadly, in 1920 a fire destroyed the library’s interior, but it was restored and the volumes replaced in 1930. By 1970 the county had three public libraries – one in Marion, one in Mullins, and one in Nichols – and a county-wide bookmobile. The libraries’ leaders sought consolidation, and the Marion County Library was formed as a result. In 1976 the Marion Public Library underwent a significant renovation and addition to accommodate the new books, resources, and services provided by the library system. Today the building is more than twice its original size and serves as the headquarters for the Marion County Library.

Interestingly, Marion did have a public library before this one, but it was not tax-supported. Somtime before 1826, a public library was housed at the courthouse. It had been organized by the Thompsonian Literary Society but lasted only a few years. Its books were then donated to the local school.

The Marion Public Library is listed in the National Register as part of the Marion Historic District:

The Marion Historic District includes both commercial and residential structures having both historical and architectural value. The residential structures are primarily wooden and are one or two stories high. The area is representative of the various styles of classically derived nineteenth century architecture. In evidence are the early frame structures of the 1800s, the antebellum houses with Greek Revival porticoes, the raised cottage style typical of the Pee Dee, and the Victorian homes of the turn of the century. Other styles include Romanesque Revival, Gothic Revival, Queen Anne, Colonial Revival, and Bungalow. The central business district retains visual continuity and unity in terms of height, scale and setback. The majority of these buildings are brick, one or two stories high, and situated along the sidewalk with no setback. As both a county seat and railroad town, Marion was important in the growth of South Carolina’s Pee Dee region. The town was named for Revolutionary War hero Gen. Francis Marion.