This Italianate-style house in the rural outskirts of Clio was constructed in 1880 on the site of a former house that was built around 1800. The property originally belonged to David Stewart, a farmer and early settler along the Little Pee Dee River. After his death in 1811, the farmhouse and 1,800 acres of farmland passed to his wife, Celia. Celia sold the house and its surrounding property to John L. McLaurin in 1837. 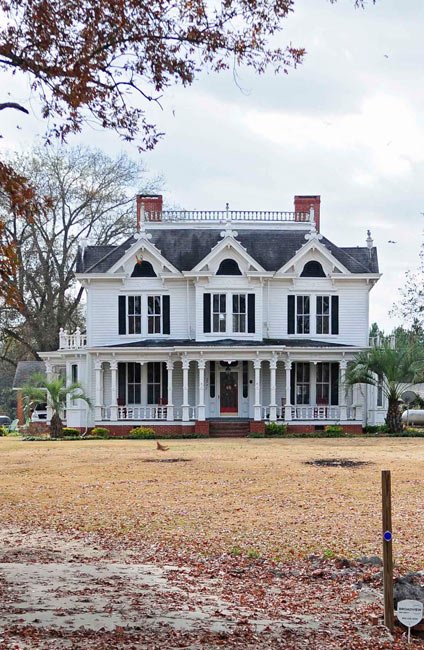 McLaurin had two sons, both of whom were active in South Carolina politics. His son John Bethea McLaurin, a planter and a physician, inherited this property. The younger John McLaurin served in the Confederate army during the Civil War. Years after his return, he built a new house on the site of the old one left to him by his father. He was elected as a representative in the South Carolina legislature in 1882.

McLaurin utilized some elements of the original house when building his home and even attached the former kitchen building to the new house. He eventually left the home to his son, Dr. John Laughlin McLaurin, and it remains in the McLaurin family.

The McLaurin House is listed in the National Register, which adds the following:

The McLaurin House is an excellent example of Italianate architecture. It was constructed ca. 1880 by John B. McLaurin on the site of an earlier structure. A two-story clapboard frame structure, the house features a truncated hip roof with a balustraded deck. The front façade is dominated by a one-story porch with balustrade and decorative brackets. The center bay projects slightly forward and its doorway features rounded sidelights and transom with ruby colored glass. Symmetrical in plan, the house features such embellishments as multi-bracketed gables and eaves, octagonal bays with crowning balustrades, decorative finials, decorative moldings with diamond motif, and a balustraded widow’s walk. The house is surrounded by a picket fence constructed ca. 1880. There are also several outbuildings of undetermined ages located on the property.