This farmhouse in the Marlboro County community of Clio presents a diversity of architectural styles that reflects the generations that have farmed this land for nearly 200 years. The core of the home was built around 1826 by Daniel C. McLaurin, who described it as “semi-colonial” and incorporated a hewn frame and sills and a Federal-style mantel. At the time, the homestead contained 446 acres that included Carolina bays, two creeks, and a variety of pines and hardwoods. An outbuilding on the property built around the same time as the house is referred to as the smokehouse. 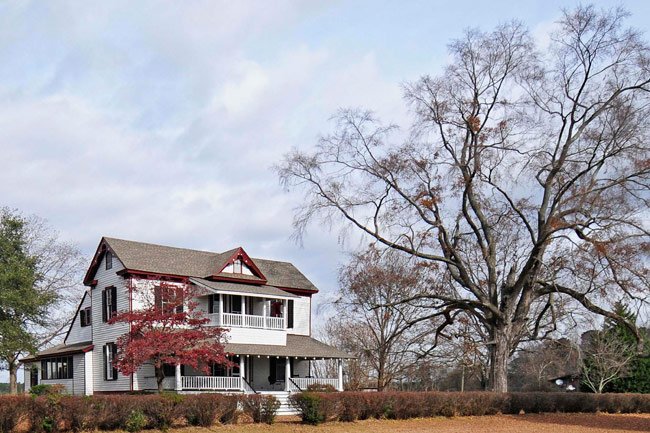 A rotary saw was used to create an addition around 1850, which included a dining room and kitchen that replaced the original kitchen. The style of construction of this addition is known as “saddlebag” and is more utilitarian than ornate. By 1899 the property was owned by the Ropers, who expanded the land to 529 acres and added the Victorian-style tri-gable additions. By the 1920s it was owned by the McColls, who used the Craftsmen style of the day to design their porch. They also planted a pecan orchard, a popular crop during that time that was cultivated to alleviate the loss of cotton after the advent of the boll weevil.

One of the property’s more interesting features in an African-American cemetery on an acre of land between two fields. It is possible that slaves are buried here as well as tenant workers. Sixteen grave markers are placed with burial sites, but depressions in the ground indicate that there could be several more people buried there. Burials on the property continued through the 1960s.

Today the property remains privately owned. Encompassing 367 acres, it is still farmed. The McLaurin-Roper-McColl Farmstead is listed in the National Register, which adds the following:

The McLaurin-Roper-McColl House Farmstead is significant in agriculture because it preserves a relatively intact 500-acre [now 367] landscape that reflects the history of agriculture in Marlboro County from the antebellum period through the 1960s. The house, the early outbuilding, the African American cemetery, the farm roads, and the built landscape features such as the drainage ditches as well as the census and family records detail the history of this representative middle-class farm. These elements define its agricultural products, its owners, and its workers, as well as the vicissitudes of farming in the Pee Dee region of South Carolina.

Architecturally the house is significant since it documents an early house type (a four-bay side-gable form of a Coastal Cottage), the construction techniques associated with hewn heart-pine framing and sawn wall boards dating from ca. 1826, and a Federal-style mantel. The kitchen and dining room document 1850s construction. The folk or late Victorian-trimmed Triple-A I-House (1899) addition and its 1920s Craftsman style modifications reflect the taste of a middle-class farming family.