This Georgian Revival church in Clio was built in 1920 and reflects the prosperity that the town enjoyed shortly after 1895, when the Florence Railroad brought the line through town on its Latta branch. The new depot enabled the mobility of passengers to larger cities as well as efficient transportation of cotton and other agricultural goods to markets. Clio was an agricultural community and thrived on the production of cotton and cotton seed oil. 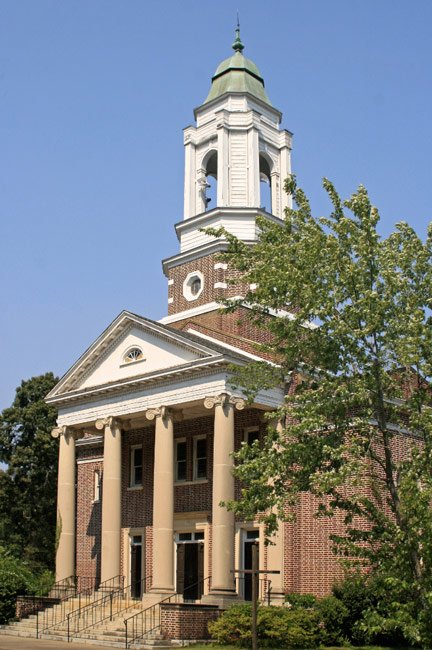 From this period through the early 1920s, when the boll weevil contributed to the decline of the cotton industry, the town grew with stately brick buildings welcoming visitors to landmarks such as the Edens Opera House. Trinity Methodist Church, with its intricate masonry work, was another such structure. Designed by architect Henry Dudley Harrall, the church’s lavish exterior features include modillions, or ornate brackets, a central bell tower, and four grand Ionic columns. Inside, more Ionic columns adorn the nave and lead to an apse, or semicircular recess, over the pulpit. 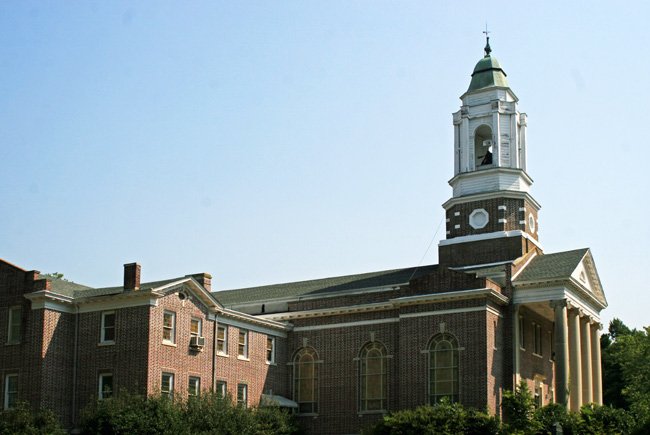 Following the loss of cotton as a source of reliable commerce along with the demise of passenger rail service, Clio suffered economically. Many of the opulent buildings that greeted train passengers either fell into disrepair or were repurposed for other uses over the subsequent decades. Trinity United Methodist Church remains an active part of the Clio community, however, and continues to welcome worshipers to its elegant sanctuary.

Trinity United Methodist Church is listed in the National Register as part of the Clio Historic District:

The Clio Historic District is notable as an unusually intact collection of late nineteenth and early twentieth century vernacular architectural design, including commercial, residential, and religious examples. Design influences include the Queen Anne, Victorian, Classical Revival, and Colonial Revival styles. The district centers along a downtown commercial district and extends outward to include significant residential sections of the town of Clio. Most of the properties were built or remodeled during the town’s boom period, from about 1895 until about 1920. The majority of these properties were constructed by local contractors without the help of an architect. The district continues to retain a unique sense of place as a small turn-of-the-century South Carolina community. Historically, Clio is significant as an economic center of northeastern Marlboro County. Its growth and development consequently reflect the evolution of a small South Carolina community which felt the combined impact of the changes that occurred in the rural trading patterns of the nineteenth century South – of railroad expansion into agricultural areas during that period, and of the great increase in cotton production.