Bordeaux Hall, also known as the Dr. John Albert Gibert Home, is located in the small Bordeaux community just beyond McCormick. Dr. Gibert was the grandson of Pierre Gibert, an early leader of the French Huguenot colony of New Bordeaux. 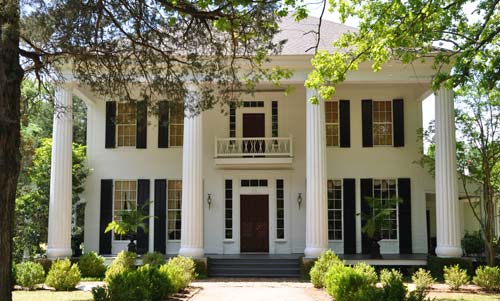 Mike Kitchens of Bishop, GA © Do Not Use Without Written Consent

Construction on Bordeaux Hall began in 1859 but was interrupted by the Civil War and not completed until 1867. The home was designed and constructed in the classic Greek Revival style by architect William Henry Jones of Atlanta, who also designed Ivy Gates Plantation, Lower Long Cane Presbyterian Church, and several other historic buildings located in McCormick County.

The Dr. John Albert Gibert Home is listed in the National Register, which adds the following information:

The Dr. John Albert Gibert House is significant as an example of an elaborated upcountry I-House. The Gibert house is particularly unusual since it was built immediately after the Civil War at the height of Reconstruction. Construction on this scale was uncommon since most local economies were considerably depressed. Stylistically the house exhibits the Greek Revival influence most common in the antebellum period.

The house is a two-story, frame, weatherboard sheathed, extended I-House embellished with Greek Revival stylistic and decorative elements. These include the full-height portico supported by massive Doric order masonry columns, the central entrance with pilastered door surrounds, sidelights, and transom, and the interior mantels, door and window surrounds. The house contains two interior, rear-wall chimneys that have been stuccoed. There have been several additions to the side and rear elevations as a result of at least two major building campaigns. One contributing one-story frame outbuilding, originally a single dwelling, but which later served as a general store, is present on the property.