While this sanctuary in Pomaria dates only to the early twentieth century, the congregation is one of the oldest Methodist congregations in the central part of South Carolina. New Hope United Methodist Church was founded in 1795 by the Reverend Nathan Boyd, and the burgeoning church first met beneath a brush arbor near a spring. Soon afterwards a log cabin was built to house the church, which was located about two miles from the present sanctuary. The log cabin served New Hope until 1831, when a a frame church was erected on this site. When New Hope merged with nearby Salem Church in 1835, the combined congregations worshiped together in the frame church until this edifice was built in 1901. 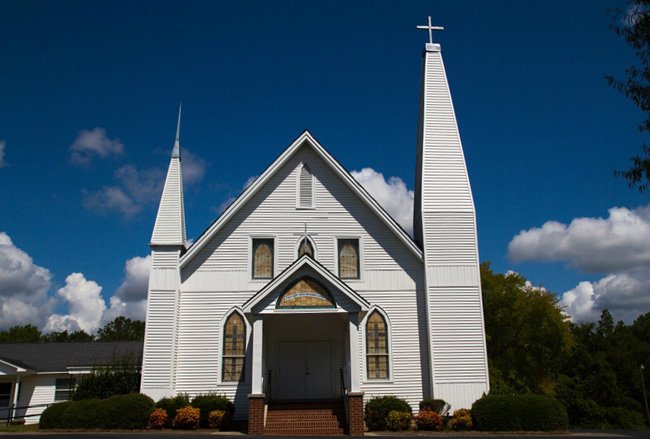 The church has undergone several modifications over the years, beginning in 1953 with the addition of the double-door entrance and classrooms flanking the vestibule. Ten years later the Educational Building was added to the church grounds, a well was built in 1965, and the church received air conditioning in 1967. The interior of the church was renovated in 1982, and aluminum siding was added to the exterior in 1984.

Unfortunately, a tornado in March of 1984 not only ripped away the brand new siding, but it also toppled the steeple; the church was repaired by that December. The steeple suffered the same fate in 1990 during a period of strong winds, and again, the spire was quickly restored. One of the lovelier features of the church is the eternal flame that illuminates the sanctuary, added in 1995. The flame was donated by church members to brighten and beautify the sanctuary.