The Trinity United Methodist Church is located in Orangeburg. This traditionally African – American church was established in 1866 and served as the headquarters for the Orangeburg Movement during the 1960s. The church hosted many civil rights meetings and rallies attended by leaders such as Martin Luther King, Jr., Roy Wilkins, and Thurgood Marshall. 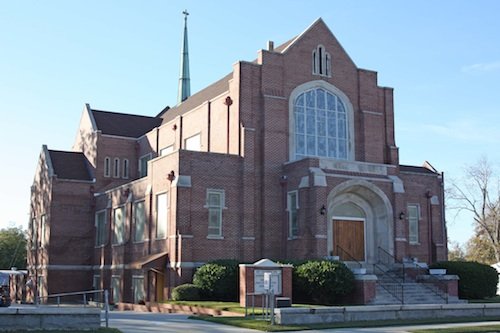 Trinity United Methodist Church is listed in the National Register, which adds the following:

Trinity Methodist Episcopal Church is significant as an excellent example of twentieth-century Gothic Revival church architecture and for its association with Orangeburg’s extensive and influential African American community. This building is the fourth separate sanctuary serving this congregation and was designed by William W. Wilkins (1881-1937), a professor of Manual Training and Industrial Education and teacher-trainer of Shopwork at South Carolina State College from 1918 until 1937. Wilkins never held an architect’s license but designed buildings under the supervision of Miller F. Whittaker.

Construction was starting in 1928, but due to the Depression was not completed until 1944. The completion of this sanctuary during a sixteen-year period of extreme economic hardship helps illustrate the importance of this church and its congregation to the city of Orangeburg. The central role played by Trinity Methodist during the Civil Rights Movement of the 1950s and 1960s as the site of the most influential leaders of South Carolina’s African American community is further confirmation of the continuing significance of this church not only to Orangeburg, but to the state as well.

The church is cruciform in plan and is set upon a raised basement with beveled cast stone water table. The church’s main block rises two stories and features a large Tudor arched stained glass window with molded cast stone surround, wall buttresses, a centered three-part louvered vent, and parapet gable with cast stone coping. The interior has a vaulted ceiling with exposed beams and a double-aisled nave flanked by wings accessed by a triple Gothic arched opening.