This former general store, known as Hester Store, stands in the Dacusville community near Easley in Pickens County. Built in 1893 by Michael Washington Hester, the two-story frame structure had a granite facade and portico added in 1933 (1). The Hester family first settled in Dacusville in 1813 and had a large range of income from their business holdings which included the family farm, a cotton gin, a grist mill, and a saw mill (1). 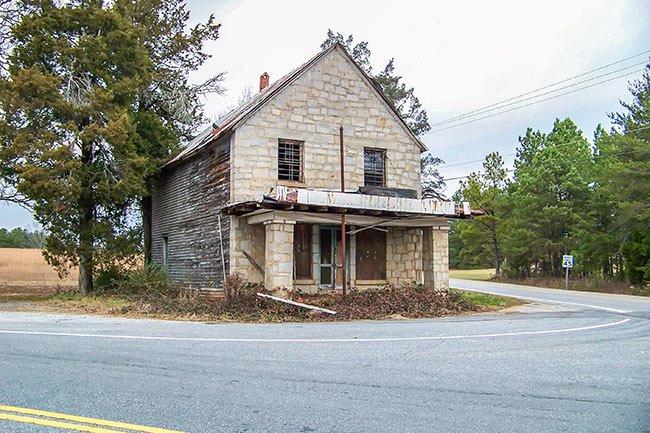 As with most other rural stores in South Carolina, Hester Store served as more than just a place of commerce; it also served as a centerpiece of the community. People gathered around and shared the stories of their daily lives here. On the first level of the store, display cases and shelves lined both sides of the interior with a large pot belly stove in the center to keep visitors warm in cool months (1). 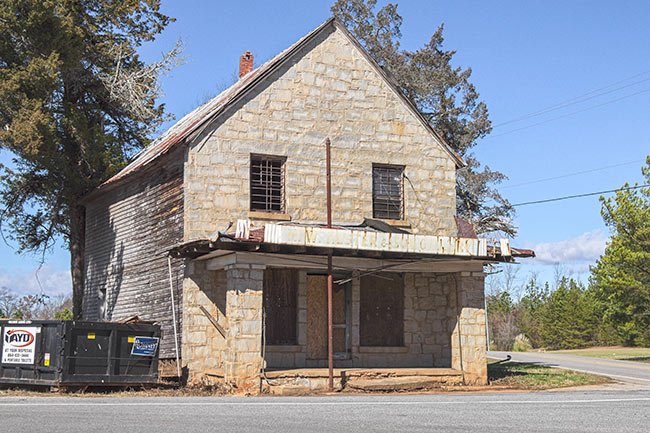 The upstairs at one time was a barber shop operated by a Mr. Hinton (1). When Michael Hester died in 1920, the store was inherited by his son Frank (1). Frank chose his youngest sister, Anne, as the new manager for the store, and she expanded the merchandise to turn the second level into a dress shop, which was operated by their sister, Mae (1).

Wellborn Bus Lines used Hester Store as a regular stop on its route between Greenville and Pickens (1). When Frank Hester died in 1981, the store was sold at auction and stood vacant for more than 30 years. Local developers turned the title over to the Palmetto Trust for Historic Preservation and Pickens County Historical Society in 2008 (2). Falcone Crawlspace & Structural Repair purchased the store from the Palmetto Trust in 2011 and restored the building, correcting years of damage from fire, termites, and neglect (2).

We would love to know more about this place. If you can help, let us know below. Thank you!

Hester Store is listed in the National Register:

Hester Store, built in 1893, is significant as an important example of a country store and mercantile business in the South Carolina Piedmont, one that operated from the last decade of the nineteenth century until the late twentieth century. The Hester Store conveys a significant connection between local farmers in the Dacusville community and the larger agricultural economy of the state. Rural country stores like the Hester Store served as important sources of supplies and credit for farmers and were vital links in the agricultural economy in the decades after the Civil War and through the Great Depression. For many years the store served not only as a place of business, but also as a central meeting place within the Dacusville community. A typical rural example of a commercial gable-front building, Hester Store was the centerpiece of the Hester family’s holdings, which included a large farm, saw mill, cotton gin, and grist mill.

The Hester family first settled in the Dacusville community in 1813. Michael Washington Hester (1854-1920), one of the many grandsons of the family patriarch, who was involved in both commerce and agriculture, built the store in 1893. Constructed with a steeply pitched, V-crimp metal clad roof, the two-story, weatherboard-clad store features a roughly square-cut ashlar granite facade and a full-width, single story, porch at grade supported by granite pillars. The granite façade and portico were added in 1933. 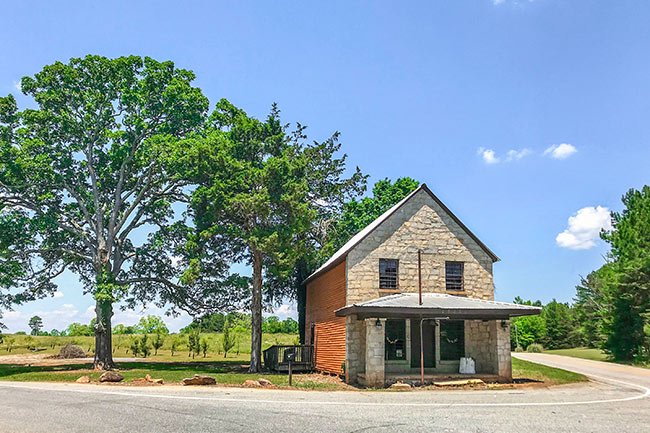 James Zurek of Greenville, 2019 © Do Not Use Without Written Consent

Photographer James Zurek, who contributed the image above, shares the following about Hester Store:

A sunny Saturday once again found my bride and I motoring around the highways and byways of beautiful upstate South Carolina. After a stop at a yard sale where assistance was required to keep a stray calf within its apparently undesirable pen and another stop at a somewhat meager estate sale where despite all odds, a tasty LP from 1961 featuring the twisting rock and roll sounds of the Candymen was found, there was enough to keep the day interesting. While cruising down Old Hester Store road outside the crossroads known as Dacusville SC, the store itself was presented in all its glory. Constructed in 1893, it still stands as a testament to the one-time hustle and bustle of this now sleepy backroads community.