The land on which this church in Pickens County sits was donated by the area’s first settler, Cornelius Keith of Virginia, who arrived in 1743 to what Cherokee Chief Woolenoy described as the “land of grain and clear water.” The two men formed a treaty soon after Keith’s arrival, and more settlers followed. The natives and the new homesteaders lived peacefully together, and much of the surrounding land was named for the Cherokee leader, though shortened to the English pronunciation, Oolenoy. 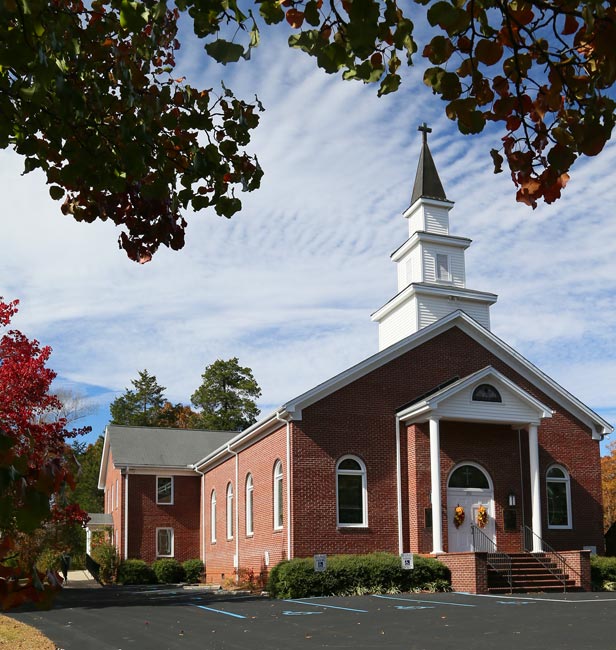 Bob Spalding of Easley, 2012 © Do Not Use Without Written Consent

Oolenoy Baptist Church was organized in 1795, and the first church building was made of hand-chopped white oak (Quercus alba). Baptisms took place in the nearby Oolenoy River. In 1840 residents acquired an up-and-down saw and built a new plank church along with a wooden baptismal pool, eliminating chilly winter submersions in the river. Members upgraded to a circular saw in 1780, purchased from Augusta, Georgia. They used the new saw to remodel the church several times over the subsequent years. By 1946 the present church was built, which contained a new baptismal pool that replaced the plank one. Renovations continued until 1952, when the building was restructured in brick. 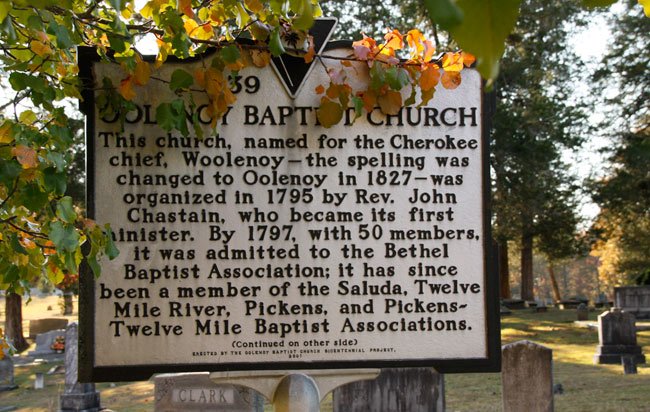 The churchyard for Oolenoy Baptist contains the graves of the area’s earliest residents and is listed in the National Register, which adds the following:

The Oolenoy Baptist Church Cemetery was established ca. 1798 in the Pumpkintown community of Pendleton (later Pickens) District. Its significance is derived from its age, its association with the early settlement and growth of the South Carolina upcountry, and as a cemetery containing the graves of persons of transcendent local importance. It is also significant for its association with Oolenoy Baptist Church, of which it is adjacent to, founded in 1795 and the first church established in the Pumpkintown community.

The cemetery is an excellent example of a typical early nineteenth century to mid-twentieth century church cemetery illustrating vernacular burial customs and gravestone art of the period. The cemetery contains 839 marked graves, with headstones, footstones, and a few plot enclosures of granite, marble, fieldstone, or soapstone. Most gravestones are marble or granite tablets, though ledgers, box-tombs, tomb-tables, obelisks, and pedestal-tombs are also present. The earliest marked grave dates from 1798, and occasional burials still occur.