This river, just 47 miles in length, takes its name from the Congaree Indians who once inhabited its shores. The Columbia skyline can be seen from this urban oasis that invites visitors to rock hop and kayak its flowing waters. 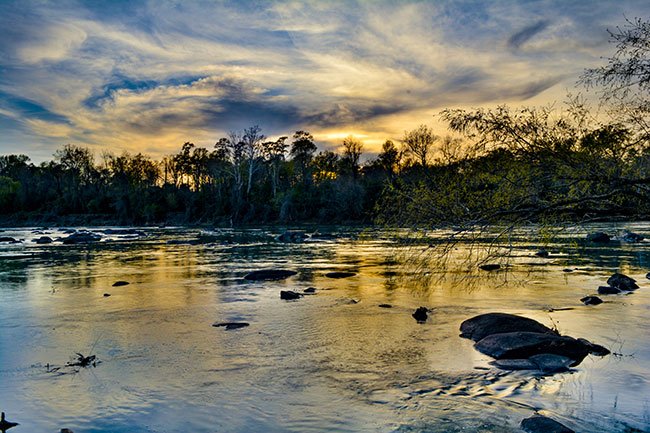 Patrick Lundy of Cayce, 2017 © Do Not Use Without Written Consent

The short river begins in the capital city with the confluence of the Saluda River and the Broad River. The Three Rivers Greenway in Cayce provides public access where one can enjoy watching these scenic rivers merge. 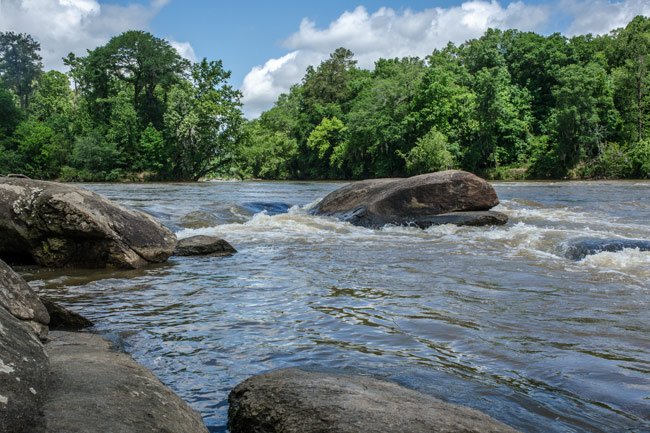 Rusty Mutschink of Rock Hill, 2016 © Do Not Use Without Written Consent

Downstream, joining with the Wateree River just above Lake Marion, the Congaree and Wateree together form the Santee River. The Santee River then flows through the coastal plains and empties into the Atlantic Ocean. 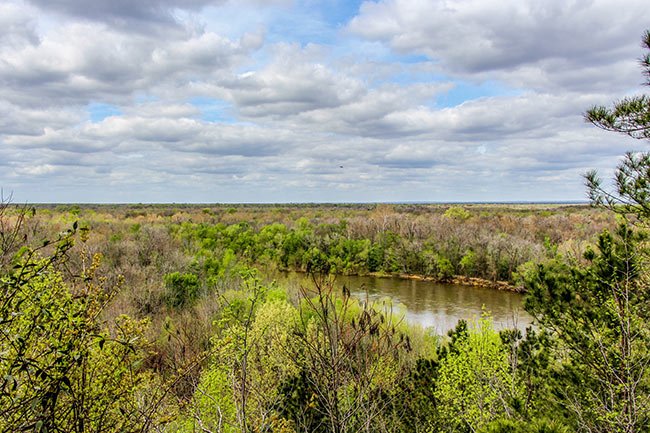 James E. Wilson of Columbia, 2017 © Do Not Use Without Written Consent

The Congaree River flows through Congaree National Park in Hopkins, about 20 miles southeast of the capital city. The 22,000-acre park is the largest tract of old growth bottomland hardwood forest left in the United States. 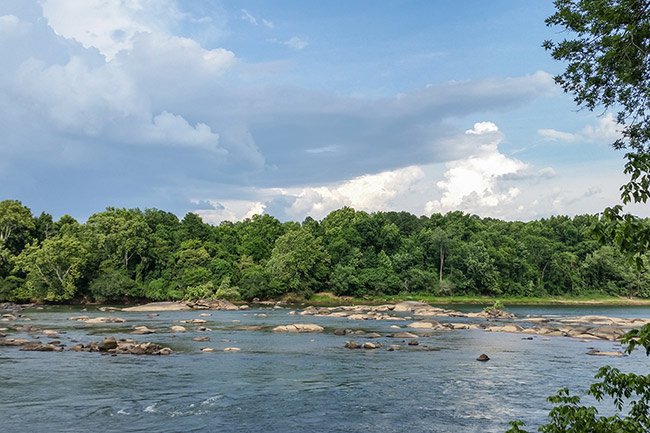 Gwen Wilson of Cayce, 2014 © Do Not Use Without Written Consent

Railroad Bridges Over the Congaree

The photo immediately below shows the CSX line as it crosses the Congaree River as seen from the Three Rivers Greenway. Just behind it, you can see a glimpse of the Norfolk Southern Railroad truss bridge that runs parallel. (That bridge is shown in more detail in the second photo below.) 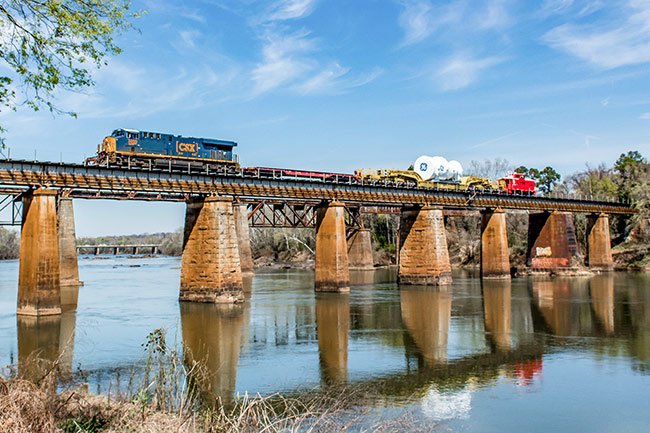 Reginald McDowell of Irmo, 2017 © Do Not Use Without Written Consent 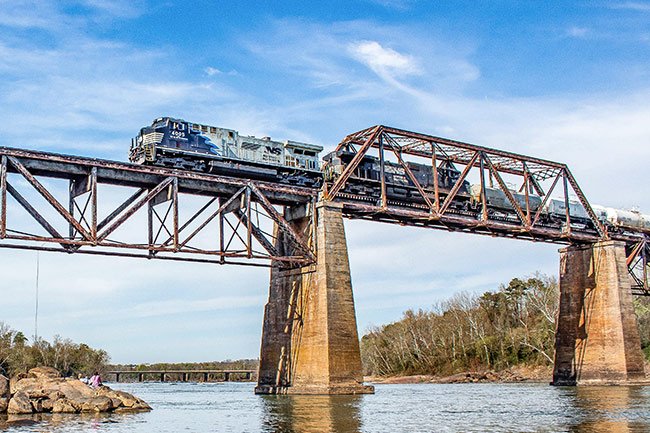 Reginald McDowell of Irmo, 2017 © Do Not Use Without Written Consent

Reginald also shares: “On a warmer than usual day at the beginning of March, I journeyed down to the Congaree River in Cayce to attempt to finally catch a train coming across the trestle over the Congaree. After finding out that there was one on the way, I set my sights for the banks and set up for the train to come over the river. To my satisfaction, Norfolk Southern train 191 was being led by a General Electric AC44C6M. These locomotives are some of the newest (in a sense) units in the fleet, and the first 6 were painted in a special scheme. I said in a sense because these units were rebuilt from older units on their locomotive roster to give them a few more years of life. Here, NS 191 is seen crossing the Congaree and giving a wave to the young ladies that are set up on the rock formation enjoying the beautiful weather.”

Reflections on the Congaree River

Contributor Patrick Lundy, who took the photo at the top of this page, says, “This is one of my favorite fishing spots. I love fishing and also love photography, so I sometimes find spots that are just right for a shot. This sunset was perfect and the water was slow enough to take advantage.” 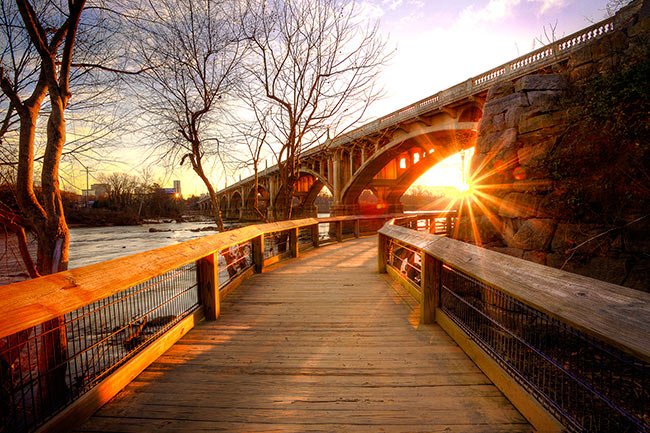 Helen Lange Evans Artography of Irmo, 2014 © Do Not Use Without Written Consent

Photographer Helen Evans, who contributed the photo above, says: “Back when this image was taken I was just starting to learn about photography, and was particularly interested in landscape photography. At the time, I worked downtown just a couple blocks away from the Riverwalk and would often come in to town as early as I could in the mornings to practice a bit before I had to start my work day. I remember the morning I took this was very cold and I was the only one around the Riverwalk at that time of the morning. I was born and raised in Wisconsin, so even though it was bitterly cold, it wasn’t much of a deterrent for me. Everything was still and quiet except for the sound of my heels briskly click-clacking down the boardwalk trying to beat the sunrise. I had an idea in my head of how I wanted to try to get the light rays so I positioned myself and my tripod where I thought I’d be able to get the effect I was seeing in my mind. My fingers where a bit numb by the time I had to pack up and head to work, but it was all worth it in the end when I went home and saw the images had turned out as I’d hoped. Looking at this image always takes me back to that cold, quiet morning.”