This picture taken in Columbia shows the old Confederate Printing Plant in the downtown Vista area. The building, located on the corner of Huger and Gervais, was built by the Evans and Cogswell Company in 1864 for the purpose of printing Confederate currency during the Civil War. 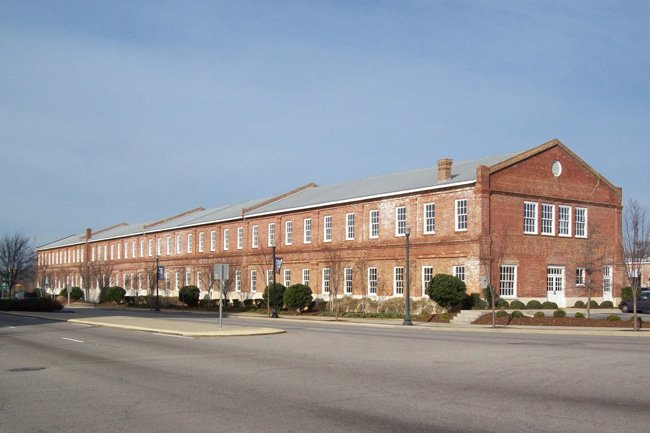 The plant closed the following year, but the building was repurposed in 1893 as the South Carolina Dispensary. Contributor Ann Helms tells us: “In 1893 it was expanded and re-opened as the South Carolina Dispensary, the nation’s first (and last) state-run alcohol distribution center. Known as ‘Ben Tillman’s Baby’, it was conceived by the governor from Edgefield to require all liquor sold in S.C. to be bottled and dispensed by the state and controlled by a state commission appointed by the governor. The rampant graft that followed got the attention of prohibitionists and reformers. Eventually the General Assembly allowed counties to vote whether to remain ‘wet’ or go ‘dry’, and by 1907 the Carey Cothran law basically closed the Dispensary for good. Its bottles are now collector’s items.”

The building you see in the picture has been renovated to house a supermarket. Some have criticized the renovation, but many have hailed it as a positive step in the ongoing revitalization of downtown Columbia’s Vista district.

The Old Confederate Printing Plant is listed in the National Register, which adds the following:

(Evans and Cogswell Company) The Confederate Printing Plant was originally constructed by the firm of Evans and Cogswell for the manufacture of Confederate bonds and other printing purposes. During the Civil War, the printing firm of Evans and Cogswell in Charleston became one of the producers of bonds, certificates of stock and currency for the Confederate government. In 1864, the firm constructed the large building on Gervais Street in Columbia and relocated its business there. In February of 1865, when General W. T. Sherman’s army occupied Columbia, the building’s contents were seized and the plant was burned. After the war, the building was eventually repaired.

The structure was later used as a liquor warehouse for the South Carolina Dispensary System. During the 1930s, the building was used in conjunction with the U.S. Seed Loan Program. It is a large two-story, commercial Greek Revival brick structure which spans the length of an entire city block. Originally it was a one-story structure with a gable roof. The second story was added after the building was burned in 1865. The southern façade is divided into repetitive bays by molded brick pilasters on both levels. A wide molded brick frieze separates the two stories.