Veterans Day of 2015 marked the installation of a special sculpture in Columbia‘s Memorial Park. Created by Illinois artist Renee Bemis, the bronze sculpture depicts a German shepherd and his handler, a United States soldier, during the Vietnam conflict. The artwork honors all military dogs and their handlers from the Palmetto State and is the result of the efforts of Vietnam veteran Johnny Mayo of Lexington. Mayo was the handler of Tiger, a scout dog, who was killed by shrapnel on their second mission together in Vietnam. Mayo credits Tiger with saving his life. 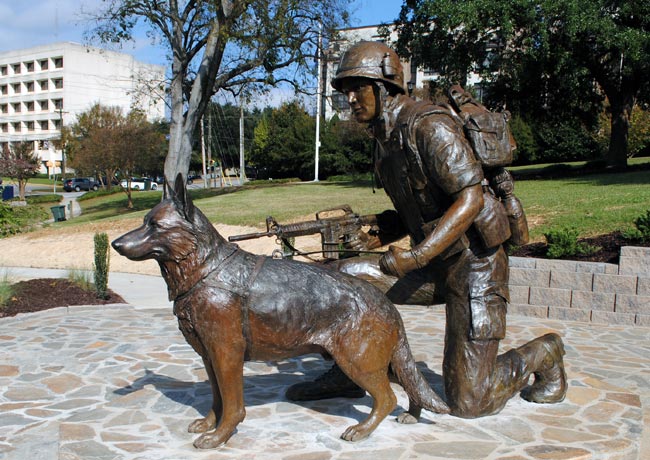 Historically, military dogs were euthanized following their service, as they were considered expendable military equipment. Around 2,000 dogs were put to sleep after the Vietnam conflict. Today, military dogs are most often adopted upon being retired, usually by their handlers. However, the earlier injustice of euthanizing these dedicated animals inspired Mayo to educate the public about the service of military dogs and work towards a memorial in their honor. Mayo first served on a committee hoping to install a national military dog memorial in Washington D.C. That proposal was rejected in 2005 in lieu of a national memorial at Lackland Air Force Base in San Antonio, Texas, where dogs and handlers train. Mayo was then asked to help with the project on the local level by the Memorial Park Commission of Columbia. 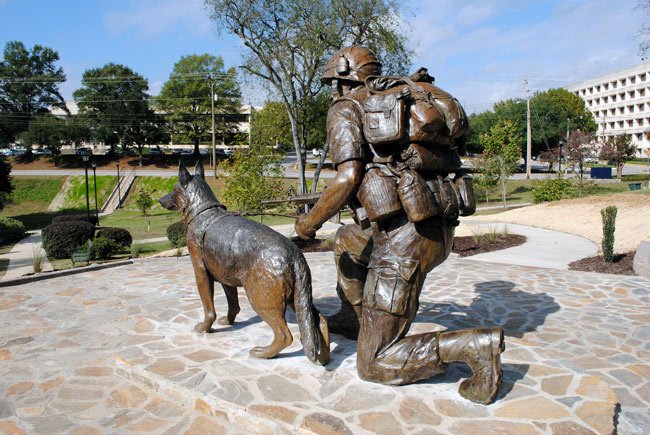 Mayo’s desire to see a tribute to Tiger and others like him was realized on November 11, 2015 when the bronze sculpture was unveiled during a Veterans Day ceremony in Memorial Park. The soldier is seven feet in height, while the dog measures four feet. For those who may notice the World War II canteen in the sculpture, Bemis added it as a tribute to her father, explaining that many soldiers in Vietnam carried World War II equipment.