Formerly called Carolina Stadium, Founders Park is the home of the University of South Carolina baseball team. The park opened on February 21, 2009, to the cheers of 8,153 fans, then a record for a USC home baseball game. 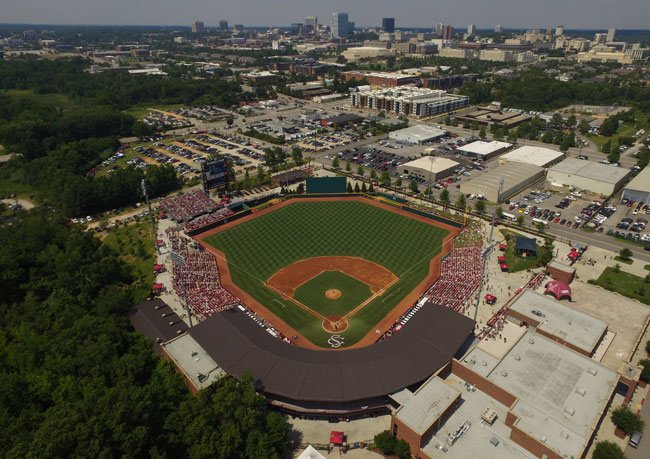 Eric Harkins of Columbia, 2016 © Do Not Use Without Written Consent

Located along the Congaree River in Columbia, Carolina Stadium replaced the university’s previous stadium, Sarge Frye Field. That park hosted the Gamecocks until 2008 and was named for a beloved USC athletic fields groundskeeper. While the new field was built with the same dimensions as Sarge Frye Field, the present stadium holds 8,242 spectators, whereas the old stadium held 6,000. On May 21, 2010, Carolina Stadium was filled to capacity, creating a new attendance record for the university that has been matched several times since.

A mural honoring the Gamecocks’ 2010 National Championship win was painted on the back of the center-field wall shortly after the victory. In 2014 the stadium was ranked the best Division I baseball venue by the website, Stadium Journey. In 2015 the university partnered with Founders Federal Credit Union, and the stadium’s name was changed to Founders Park to reflect the credit union’s sponsorship. Founders Park is the third college baseball stadium in the nation to obtain corporate sponsorship.