The Hampton-Preston House in Columbia was built in 1818 for local merchant Ainsley Hall. Hall soon sold the house to the first Wade Hampton, grandfather of noted Civil War general and South Carolina governor Wade Hampton. Hampton’s third wife, Mary Cantey, filled the property with extravagant gardens that consumed an entire block. After Hampton’s death, the house passed to his daughter, Caroline Preston. She and her husband John, a state senator, doubled its size. 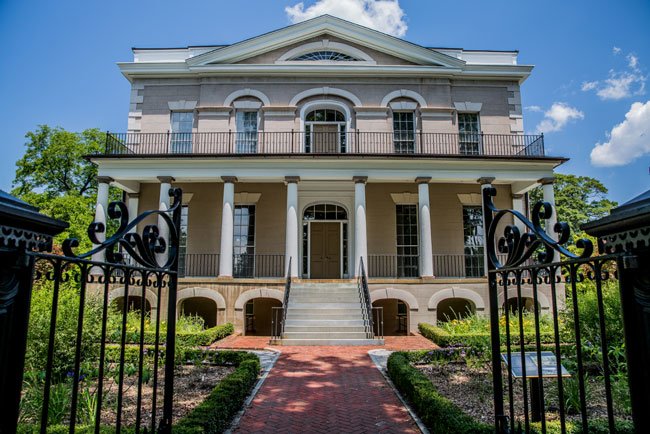 Local lore has it that when Sherman made his devastating march through Columbia, burning most of the city to the ground, this house was spared due to a clever and quick-thinking nun: Sister Bapista Lynch implored Sherman to spare the house so that she could use it as a convent, and he did. Whether or not the tale is true, the Ursuline Convent did purchase the house in 1887. Prior to that, Union troops used is as their headquarter during the Civil War, which is likely the reason the manse was not burned. 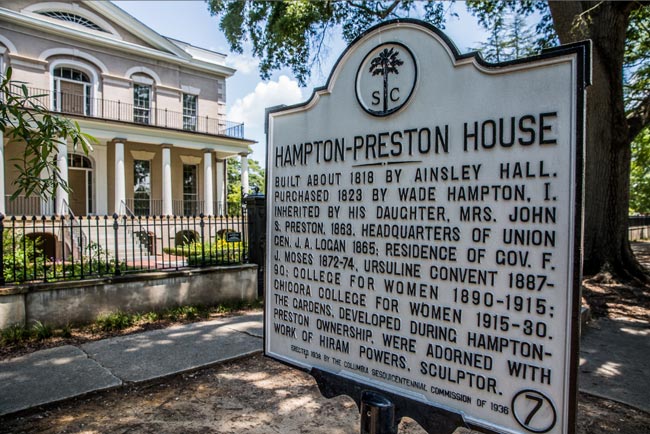 The house was eventually sold and passed between several educational institutions. The gardens were bulldozed in 1947, and much of the land was sold off for development. The Hampton-Preston House was refurbished in 1970 and became the centerpiece of the Midlands Tricentennial Exposition Center. A restoration effort to return the gardens to their former glory began in 2012. 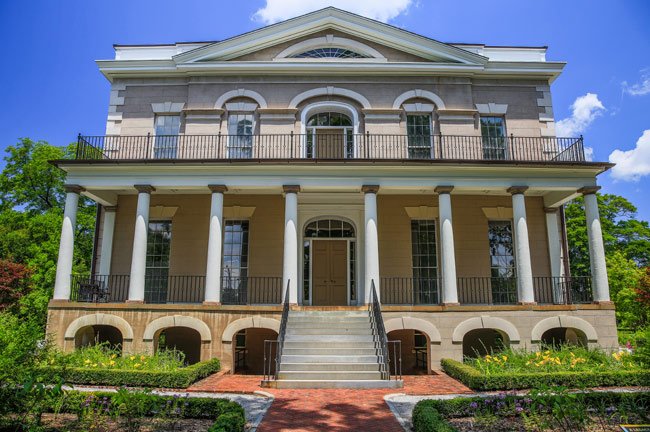 Today the home is open to the public as a house museum maintained by the nonprofit group, Historic Columbia. The organization also manages the historic Big Apple, the Woodrow Wilson Home, and the Robert Mills House. 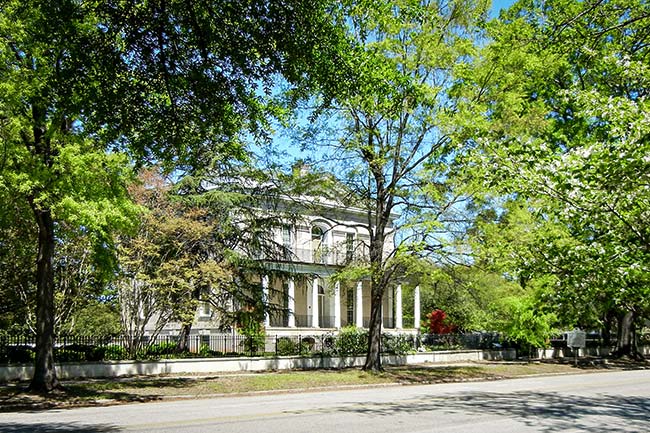 Helen Schilling of Batesburg-Leesville, 2016 © Do Not Use Without Written Consent

The Hampton-Preston House is listed in the National Register:

The Hampton-Preston House is a handsome city mansion that was built in 1818 by Ainsley Hall, a Columbia merchant. Robert Yates was the contractor and Zachariah Philips served in the capacity of architect. Hall sold the house to the first Wade Hampton, fighter in the American Revolution and general in the War of 1812, planter, businessman, developer of the American West. His son, Wade Hampton II, lived in the house as did Wade Hampton III, the Civil War general, and state governor.

The house is also associated with leading South Carolinian and state senator, John S. Preston. The South Carolina Presbyterian Institute for Young Ladies, later Chicora College, acquired the mansion in 1890. The house is of a post-Colonial, Classical Revival style, having a broad veranda across the front with Doric columns and a fanlight above. Inside is a sweeping circular stairway with mahogany rails. A crystal chandelier hangs in the middle of the hall. The rooms are spacious, and one is adorned with a white marble mantel by the sculptor Hiram Powers. The gardens covered a city block and were known throughout the state, but have been plowed under and felled, later becoming a parking lot.