The building behind the South Carolina Law Enforcement Officers’ Memorial within the State House complex in Columbia is the Rembert Dennis Building. It is one of several modern buildings added to the grounds of the State House in the 1970s and 1980s when Senate Street was removed to create pedestrian space. The Rembert Dennis Building houses several important offices, including the South Carolina Attorney General. 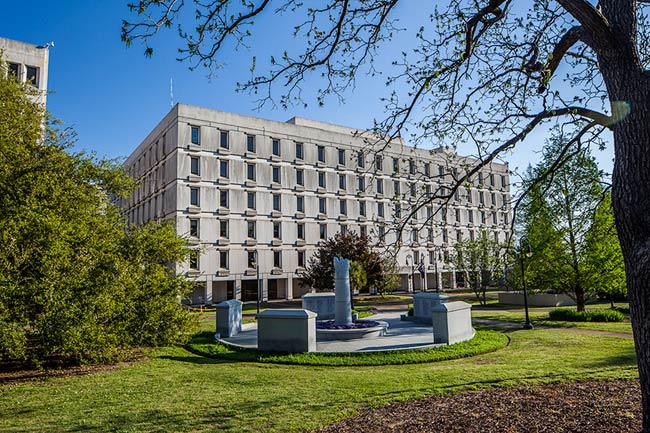 Dennis was wary of anyone assuming his run for the senate was an avoidance of military service at the beginning of World War II. According to his papers at the University of South Carolina Library, Dennis says, “I had a burning desire to fill the seat that my father had lost by assassination and my mother had lost because it was too early for women to be accepted for higher office … It was my feeling that I was going to be severely criticized for running for political office when I was of the age that I was expected to be in military service … I decided I would run and abide by the results and publicly stated that it was their [the public’s] decision and I would be a volunteer for service if I didn’t win.”

Dennis’s father, former state senator Ned Dennis, was shot and killed on July 24, 1930 by W.L. “Sporty” Thornley. His assassination is thought to have been prompted by his tenacious enforcement of prohibition laws as both an attorney and senator. Many believe Thornley was hired by bootleggers to kill Dennis.

Rembert Dennis succeeded his colleague Edgar A. Brown as Chariman of the Finance Committee in 1972, and following the death of Senator Marion Gressette in 1984, served as Senate President Pro Tempore until 1988. Dennis died in 1992.

The memorial that graces the grounds near the Rembert Dennis Building honors fallen South Carolina Law Enforcement Officers and was dedicated on February 15, 2006. It was designed by Robert P. Young.