This simple frame church in the Richland County community of Eastover was founded in the 1870s as a mission church for freed African-Americans following the Civil War. Prior to Emancipation, slaves attended worship services with their white owners. Once they were free to worship on their own, many former slaves established their own churches, and the number of African-Americans attending Protestant Episcopal (now simply called Episcopal) services suffered a significant decline. 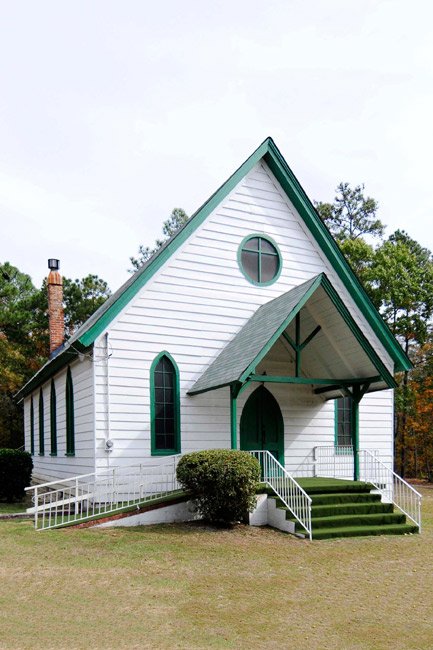 In 1871 Bishop William Howe spearheaded an effort by the Protestant Episcopal Church to establish mission churches in the Episcopal denomination for newly-freed black South Carolinians. The Reverend Thomas Clarkson, son of a wealthy planter, was charged with ministering to former slaves in lower Richland County. After his family sold their plantation, Middleburg, Clarkson and his wife, Septima Clarkson, relocated to the Eastover area where Septima Clarkson began a Sunday School for local African-American children.

In 1885 a chapel was constructed in the community with funds donated by the Reverend John Saul of Philadelphia. The small church was called Saul Chapel for its benefactor, and the Reverend Clarkson served as its minister. The Saul Chapel burned in 1891, and this small structure was built in its place in 1893. It was named St. Thomas’ Protestant Episcopal Church, and a mission school by the same name was established on the site and operated by the Clarksons until the 1940s. Following the 1911 death of Septima Clarkson, the Clarksons’ daughter, Julia, became the school’s teacher. St. Thomas’ Church retains an active congregation, and both black and white priests have served the church over the years.

St. Thomas’ Church is listed in the National Register:

St. Thomas’ Protestant Episcopal Church is significant for its association with the mission work of the Protestant Episcopal Church among the black population of lower Richland County following the Civil War. Architecturally it is significant as an unusually intact late nineteenth century vernacular church building featuring influences of the Gothic Revival style. The interior is particularly noteworthy. Constructed in 1892-1983, St. Thomas’ Protestant Episcopal Church is a simple, one-story, frame church building displaying elements of the Gothic Revival style. Despite minor alterations, the church retains the ability to convey its historical and architectural significance. The façade features a one-bay, gable-roofed porch supported by wooden posts. The rear elevation features a large tripartite lancet window flanked by smaller single lancet windows. The interior of the church features a ceiling with exposed beams and trusses and beaded-board wainscoting. The nominated acreage, which is located in an undeveloped area in the Sandhills, also contains the associated cemetery, site of St. Thomas’ Mission School, and a modern concrete parish house.