The Wade Hampton State Office Building, located on the State house grounds of Columbia, is significant for its unaltered interior that harkens to the days of segregation. The building itself, completed in 1940, also bears traces of nepotism in our government. 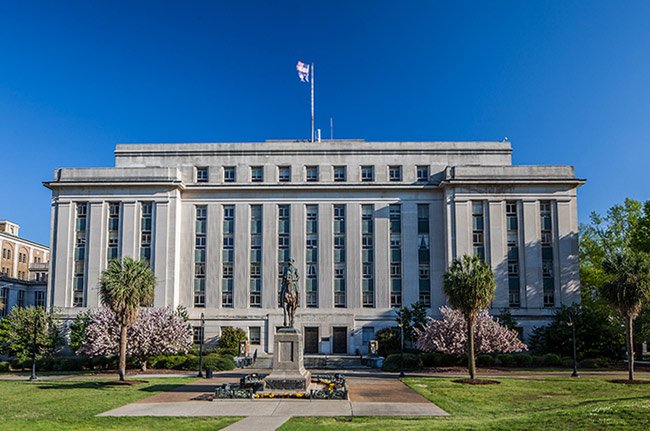 In October of 1938 a grant for the construction of the building was given by the Public Works Administration, one of several federal agencies created to alleviate the destitution of the Great Depression. The grant was issued in conjunction with the South Carolina Sinking Fund Commission, an agency which oversaw construction and maintenance of state buildings. Once it received the grant from the PWA, the Sinking Fund Commission – what would later become the State Budget and Control Board – immediately began searching for an architectural firm to design the building. 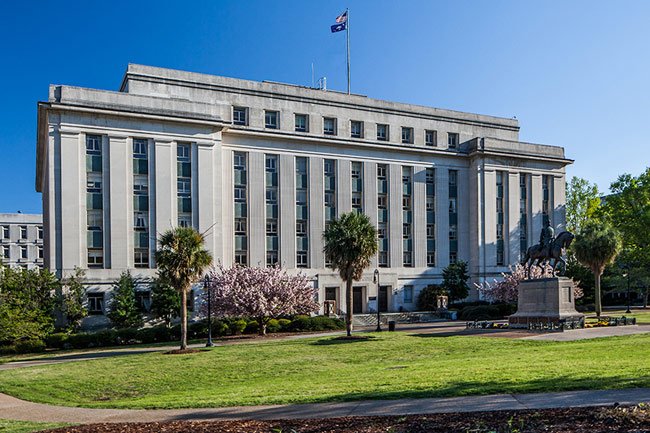 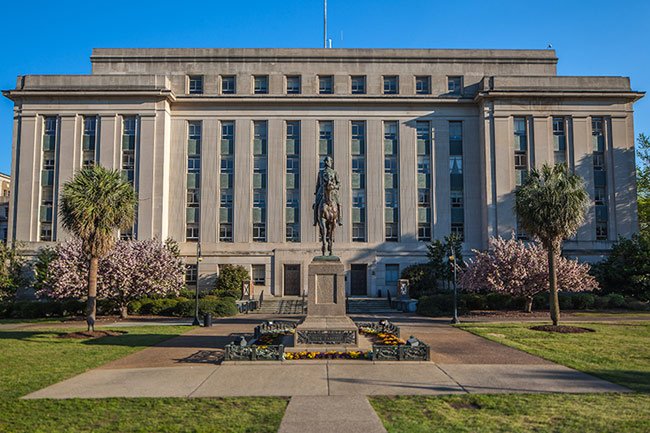 In December of 1938, the Sinking Fund Commission received a letter from regional director of the PWA H.T. Cole stating that it had come to his attention that “in the selection of the Architect for the State Office Building and the University [of South Carolina’s] Men’s Dormitory [Preston College], that a member of the Supreme Court was very active in the lobbying of the selection of these architects, and that the firm selected was a firm of which a son of the Supreme Court Justice is a member.” The justice was David Baker, father of William Baker, a partner in the Florence firm Hopkins and Baker. 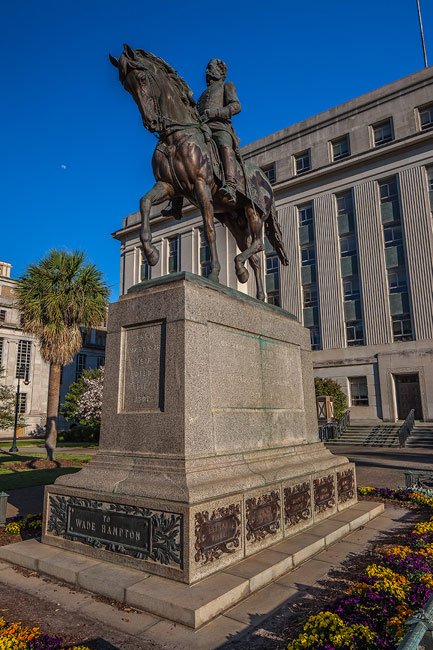 Even sitting governor Olin Johnston acknowledged that the hiring of Hopkins and Baker was inappropriate; however, designs for the new state building were already underway. Interestingly, most of the Sinking Fund Commission minutes from that date forward do not indicate the presence of Hopkins and Baker at the commission meetings, and Lafaye, Lafaye and Fair were the primary architects of the project.

By May of 1940 the Wade Hampton Building, named for Confederate general and former governor Wade Hampton III, was dedicated. The style of the building is typical of most government buildings of that era, considered a restrained Classical Revival with a few Art Deco details, such as the limestone engravings in the entry portals depicting South Carolina agriculture and the original chandelier that still graces the main lobby.

One feature noted on the 1938 blueprint of the building were segregated restrooms. Indeed, these same basement-level restrooms – though no longer segregated – are still in use today, as very little of the building’s structure has changed. Also pertaining to segregation, the Wade Hampton Building initially housed state offices responsible for upholding the segregation laws prior to 1954, including the Attorney General’s office as well as the Department of Education. This is somewhat appropriate since the election of the building’s namesake was hotly contested and likely owed both to voter fraud and the intimidation of black residents.

In the 1970s the portion of Senate Street that originally ran in front of the building was removed in order to make the state house and its surrounding buildings a pedestrian complex. The statue of building’s namesake, Governor Hampton, dedicated in 1906, was moved from the east side of the building to its current location at this time.

The Wade Hampton Building is listed in the National Register, which adds the following:

The Wade Hampton State Office Building, completed in 1940, is historically significant within the multiple property submission “Resources Associated with Segregation in Columbia, South Carolina, 1880-1960.” As the seat of government for numerous agencies since 1940, including the Attorney General and the Department of Education, it has been viewed as a symbol of the state’s policy of racial segregation. In addition to the policy aspect of segregation that the building represents, it also has a tangible connection to segregation. The Wade Hampton State Office Building was originally designed with segregated spaces for African American patrons conducting business there. These spaces were restrooms located on the basement level and were labeled on the original 1938 blueprints as “Colored” restrooms.

The building is also significant for its architectural significance and remarkable physical integrity. Generally unchanged since its completion, the large six-story building is an exquisite example of late depression era restrained classicism, the preferred style and appearance of government buildings at the federal, state and local levels at that time. The building also has the distinction of being designed by the prominent Columbia architectural firm of Lafaye, Lafaye and Fair, in association with Hopkins and Baker of Florence. The restrained classicism of the building, in accompaniment with Art Deco inspired details, reflects the moderated taste in architectural design prevalent during the Great Depression of the 1930s. The Wade Hampton State Office Building is the most unaltered building in the South Carolina State House Complex; all others have undergone significant renovations in recent decades.