This Italian Renaissance building within the State House complex in Columbia was completed in 1926. It was designed by architect Harold Tatum, who moved to South Carolina in 1919 after creating buildings across the United States. Nationally-renowned architect Milton Medary served as a consultant on the project. The structure sits next to the Wade Hampton Building. 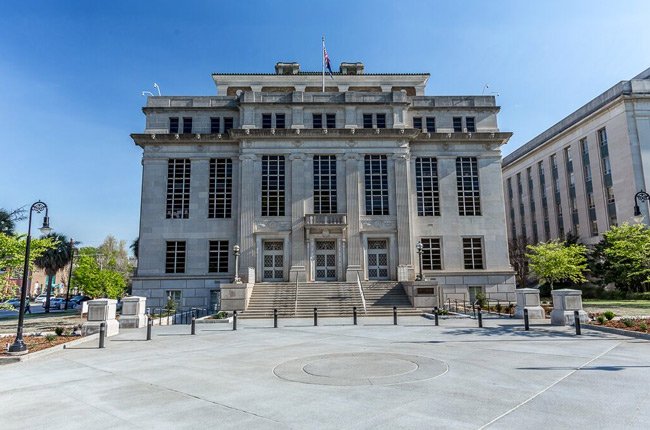 The John C. Calhoun Building was initially occupied by the South Carolina State Highway Department. The Commission Chief at the time was Ben Sawyer, for whom the swing bridge linking Mount Pleasant to Sullivan’s Island is named. He served as Chief Highway Commissioner of the South Carolina Highway Department from 1926 until 1940. Sawyer and Governor Olin Johnston, who served as governor of South Carolina from 1935 through 1939 and again from 1943 until 1945, were in constant conflict regarding the state’s highway budget. While Sawyer advocated for the paving of state highways in the mid-1930s, Johnston’s stance was that such a project was too costly in the midst of the Great Depression. Johnston also promoted driving for all social classes and proposed that license tags for vehicles be available for purchase for only three dollars, a plan to which Sawyer strenuously objected.

In response to Sawyer’s lack of enthusiasm and cooperation for Johnston’s ideas, the governor ordered the National Guard to seize the John C. Calhoun building with the force of arms. Johnston then placed his own men in the building as the new highway commission and effectively occupied it from October through December of 1935. Sawyer responded with a lawsuit and won, continuing his position until his death in 1940. The dramatic scene was the impetus for a law stating that elected officials are prohibited from using military force to resolve conflicts.

The building was named for South Carolina statesman and Vice President of the United States from 1825 through 1832, John C. Calhoun. Today it serves as the South Carolina Court of Appeals.

The John C. Calhoun Building is listed in the National Register:

The John C. Calhoun State Office Building, built in 1926, is architecturally significant as an important example of Italian Renaissance Revival architecture in the capital city of South Carolina, for its association with Harold Tatum, South Carolinian architect of note, and with nationally recognized architect Milton Medary, who served as the consulting architect to the project. The Calhoun Building is also significant under Politics/Government for its association with the South Carolina State Highway Department, the Calhoun Building’s primary tenant until 1952. From 1926 to 1940, the department experienced incredible growth under the leadership of Chief Highway Commissioner Benjamin M. Sawyer. Sawyer was at the helm when the National Guard seized and occupied the Calhoun Building from October to December 1935 under the orders of Governor Olin D. Johnston. When resolved, this incident formed a legal precedent ensuring that elected officials cannot use military force to solve political or civil disputes.