This hand-hewn farmhouse in rural Saluda may have already been built when the 201-acre tract of land on which it sits was deeded to Peter Dorn in 1880 by his mother-in-law, Sarah Stevens. Dorn and his wife, Pinnie, had two children at the time he acquired the land owned by Dorn’s father-in-law, Elisha Stevens, in 1864. However, the home would not accommodate the growing Dorn family, which eventually numbered 11 children. Thus, Peter Dorn built two additions to the one-story home, both likely added before the twentieth century. 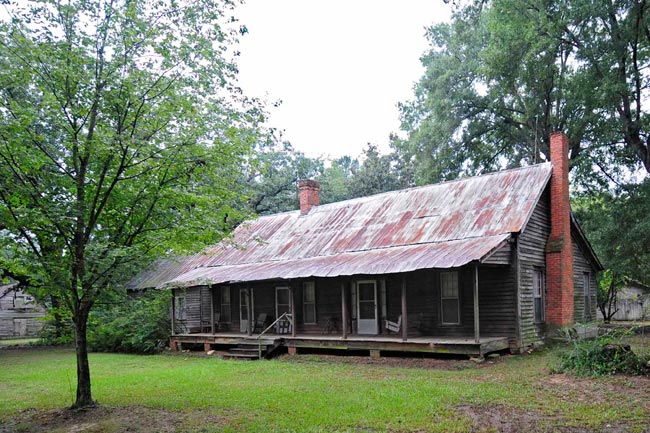 The original home consisted of two rooms, a pantry, and a porch. Dorn soon built a four-room addition after settling into the home with his family and later added two more rooms and extended the porch. The Dorns also developed the property into a homestead by adding several outbuildings, including a barn, a smokehouse, a well, a cellar, and a buggy house, to name a few. Four original outbuildings remain: the livestock barn, a corn crib, the smokehouse, and the buggy house, which also served as a woodshed. Three brooder houses, or poultry sheds, were added to the property in 1945. The Dorns primarily farmed cotton, corn, and wheat along with subsistence farming. While the home was modified throughout the twentieth century, including replacing the wooden shingled-roof with tin in 1933, it remains an intact example of a late eighteenth-century Upstate farmhouse.

Dorn divided his land into three tracts in 1928 and conveyed 64 acres, including the homestead, to his youngest son, Charlie Dorn. The two other tracts were given to two other sons. In 1961 Charlie acquired an additional seven acres from the estate of his brother, bringing the total acreage to 71. As of the late 1990s, the property was still in the ownership of the Stevens-Dorn family.

The Stevens-Dorn Farmstead is listed in the National Register:

The Stevens-Dorn Farmstead is representative of the simplistic construction methods and lifestyle of rural families in upstate South Carolina in the late nineteenth through the mid-twentieth centuries. The 71.5 acre tract of land is a part of an original 201 acre tract held and used by four generations of the same family for at least 131 years and offers an intact collection of vernacular farm buildings forming the core of an early rural agricultural complex. The house is a one-story rectangular form, one-and-one-half room style building with three major front doors and one minor front door. The roof is a gable extended roof of tin, ca. 1933, originally wooden shingles. The walls are weatherboard and the foundation is of stone, wood and brick piers. Three chimneys serve the house; one interior end, one central, and one exterior end. Construction of the house was accomplished in three different, yet date unrecorded, phases. All three phases likely occurred between ca. 1880 and ca. 1900. Contributing outbuildings include a woodshed/buggy house, smokehouse, corn crib, barn, all ca. 1880, and three brooder houses ca. 1945.