This abandoned truss near the town of Duncan stretches over a dam built on Berry Shoals on the South Tyger River for Tucapau Mills. The mill was built in 1895 on the Middle Tyger River and named for the Spartanburg County community of Tucapau (renamed Startex in 1936). Five years after the establishment of Tucapau Mills, the factory expanded and built a second mill. From that point both mills would utilize hydroelectric power supplied by the dam and powerhouse built in 1900 on nearby Berry Shoals, designed by textile mill engineer Stuart W. Cramer. 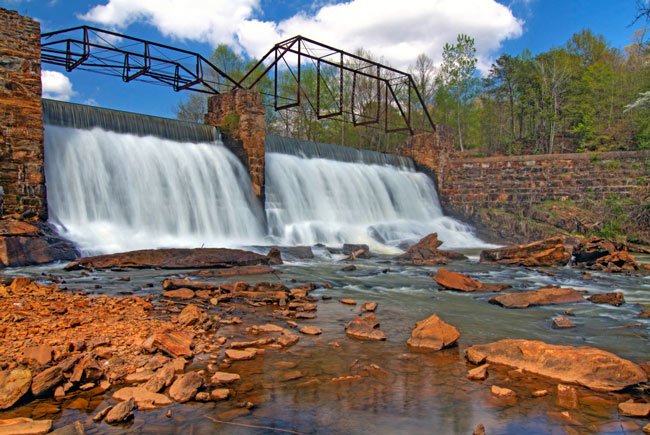 Electricity was supplied to Tacapau Mills and the village of Tacapau the same year the dam and powerhouse were built. However, in 1903 heavy rains caused flooding in the valleys of the Middle Tyger and South Tyger Rivers, damaging the Tacapau Mills and the Berry Shoals dam. The mills and the dam were repaired, and the Berry Shoals power plant continued operating until 1959 when the powerhouse was deemed too outdated to be efficient.

Today the dam and powerhouse are owned by the Startex-Jackson-Wellford-Duncan Water District; an initial refurbishment effort was abandoned and the powerhouse remains unused.