This opulent home in the historic Converse Heights neighborhood of downtown Spartanburg was the residence of two prominent South Carolina governors. Built in 1901 for Governor and Mrs. John Gary Evans, it is striking in its Neoclassical design and also features Dutch Colonial details such as a side gambrel roof. Both designs were ahead of their time, as the Victorian era remained rooted in the Queen Anne style, and Neoclassical and Dutch Colonial would not see their popularity rise until later in the twentieth century. 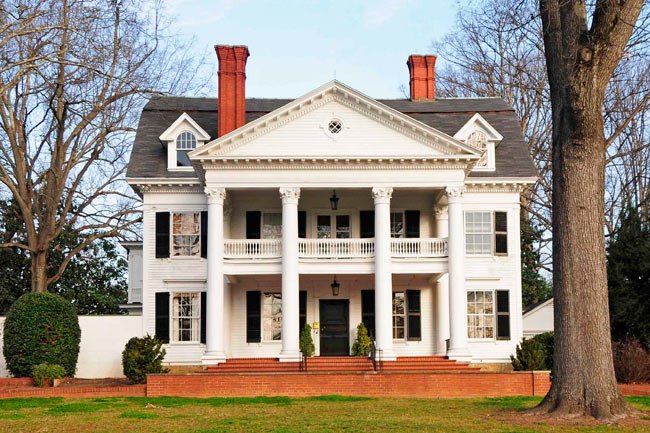 Governor Evans presided over the South Carolina Constitutional Convention of 1895, where he advocated for the prohibition of interracial marriage, the segregation of education, and the disenfranchisement of black voters. Ironically Evans’ wife, Emily Mansfield Plume of Waterbury, Connecticut, was a staunch suffragist who campaigned tirelessly for women’s civil rights. She served as the first female Vice Chairman of the State Democratic Executive Committee and was instrumental in starting the Spartanburg Equal Suffrage Club, the first in South Carolina. Her influence on her husband is evident in his support of coeducation in South Carolina College, now the University of South Carolina.

Upon the deaths of Governor and Mrs. Evans in 1942, the house was purchased by attorney Jennings Thompson, who sold it to future governor Donald Russell and his wife in 1947. Governor Russell’s legacy rests at the other end of the segregation spectrum; his inaugural year in office saw the integration of both Clemson University and the University of South Carolina. He served only two years of his term before being appointed to the United States Senate upon the death of Senator Olin Johnston. He was replaced by lieutenant-governor Robert McNair. Senator Russell, and his wife lived in the home until his death in 1998.

The Evans-Russell House is listed in the National Register, which says the following:

The Evans-Russell House, built ca. 1901, is significant as an exceptional example of Neo-Classical Revival residential architecture and for its close association with Governor John Gary Evans (1863-1942), for whom the house was built. Governor and Mrs. Evans lived in the Evans-Russell House from its construction in 1901 until their deaths in 1942. The house is also noteworthy as the residence of Governor Donald S. Russell (1906-1998) from 1947 until his death in 1998. The Evans-Russell House is one of the oldest houses in Converse Heights, predating the formal development of the neighborhood. The house is an intact example of the full-height entry porch subtype of early Neo-Classical Revival architecture. The two-and-one-half story frame house is distinguished by its classical ornamentation, most notably the two-story portico largely of the Corinthian order, with its denticulated and modillioned cornice, pulvinated frieze, classical balustrade, and pedimented gable. Other Neo-Classical Revival details include extensive dentil work and modillions, wide cornices and decorative trim, and classically-framed double-hung sash windows.

The house is unique in that it features a large, side gambrel roof more typical of Dutch Colonial Revival style houses of the 1920s and 1930s. The Evans-Russell House is further noteworthy because it reflects the transition from Victorian to classically-inspired architecture in Spartanburg during the early twentieth century. The house was reoriented on the existing lot ca. 1940, but the short move did not compromise the historic location, setting, or association for which the property is significant. Alterations in the latter part of the 1950s removed the porte-cochere and significantly enlarged and reconfigured the rear addition. The property also contains one contributing structure, a small, screened “tea room” of decorative iron frame and asphalt-shingled hipped roof that was probably constructed ca. 1955.