The Tyger River is the highlight of Roebuck’s Tyger-10 Nature Park in Spartanbug County. The privately-owned 10-acre park, which opened in 2012, allows visitors a public access to the Tyger River. 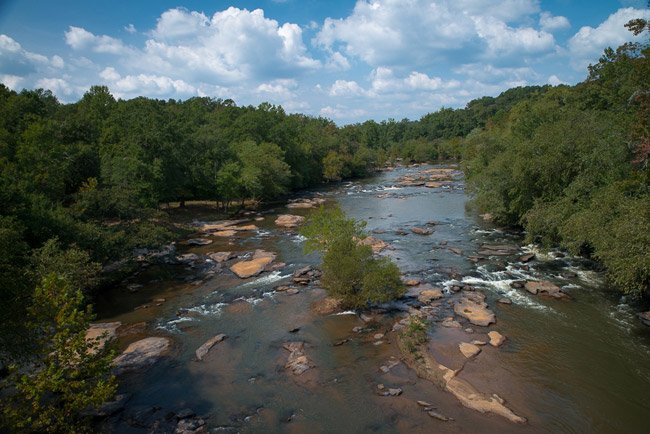 The river, allegedly named for a French fur trader named Tygert, begins where its three tributaries – the North, Middle, and South Tyger Rivers – meet in Spartanburg County near Woodruff. From there it flows through the Sumter National Forest and eventually joins the Broad River at the junctions of Union, Fairfield and Newberry counties. The upper portion of the River in Spartanburg County contains Class I and Class II rapids.

The Tyger-10 Nature Park also boasts walking trails, and the Tyger River Foundation has plans to build an interpretive center.

Reflections on the Tyger-10 Nature Park

Contributor Peter Krenn, who frequently takes his motorcycle out for photography adventures, shares about the above image: “I thought it was a really nice shot and unusual with all the rocks showing, which is kind of rare for a South Carolina river.”