Methodist campgrounds such as Indian Field, St. Paul, and Cypress Methodist – all in Dorchester County – have remained popular with worshipers since the early 1800s, when people in rural areas gathered to hear circuit-riding preachers deliver sermons. The Hemingway Interdenominational Campground in Williamsburg County is a newer religious campground that follows the traditional centuries-old model of inviting people to abandon the modern world and focus on faith and fellowship in a rural setting. 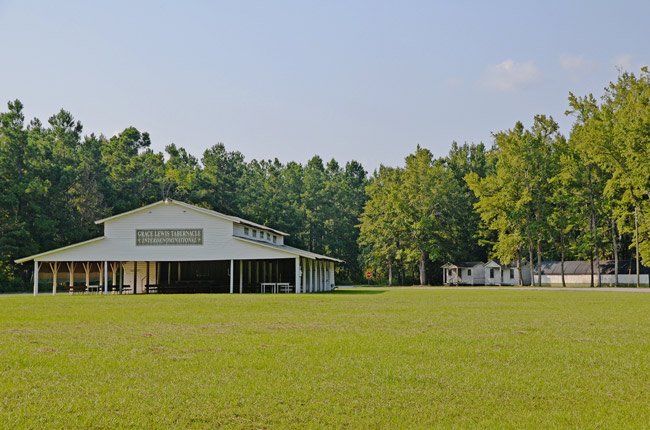 Local resident Grace Lewis and her son, Olin, donated 10.2 acres of land in the Pee Dee for use as a faith-based campground for youth in 1961. Soon afterwards, separate girls’ and boys’ dormitories were built, as well as the Grace Lewis Tabernacle, seen above and below. The tabernacle is an open-air worship site with seating for up to 275 people. It was constructed in 1963 from salvaged material taken from the former manse of neighboring Indiantown Presbyterian Church. 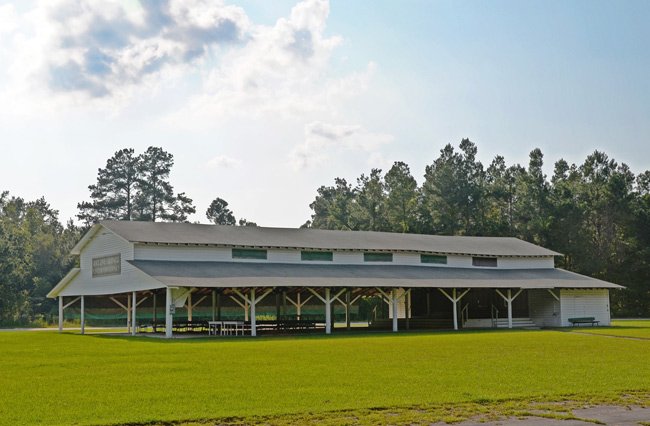 The facility evolved to become a campground for local families wishing to converge annually for a week of spiritual renewal. Each May, a camp meeting, or gathering, is held for five nights and led by a variety of religious leaders, both local and visiting. Programs include worship services, prayer walks, and music. Families stay in the dormitories or rustic cabins, seen below. Four air-conditioned motel rooms are also available. The boys’ dormitory, seen standing behind the cabins in the below photo, is a barracks-style room with 20 beds and a large community bathroom. Like most of the structures at the campground, it is cooled with an exhaust fan and offers only a minimum of amenities. 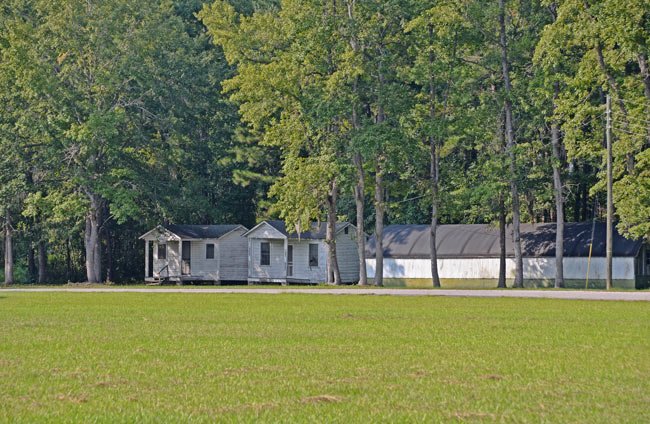 Similarly, the girls’ dormitory, seen below, features 17 bedrooms and a total of 15 double beds and 21 single beds on two floors. It also contains four community bathrooms, two on each floor. The facilities, which include a cafeteria, are available for rent during times other than camp meetings for events such as weddings and church retreats. Due of the lack of climate control in most buildings, guests are encouraged to visit during the spring and fall. 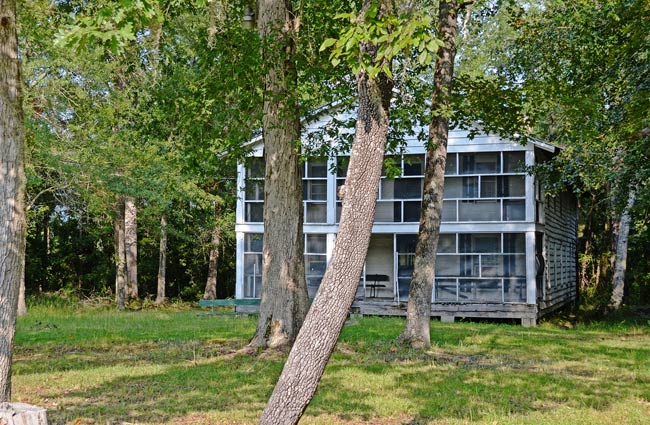 The Hemingway Interdenominational Campground operates as a nonprofit organization and tithes ten percent of donations to local and international missions. For more than 50 years the campground has provided an idyllic setting for those wishing to let go of daily distractions and focus on faith and community.