Like a sentinel from the past, the Burt-Stark Mansion in Abbeville guards the northern approaches to the city at the Y-shaped intersection of North Main and Greenville streets. The house was constructed in the 1830s by a lawyer and planter named David Lesley; it was purchased by Confederate Army Major Armistead Burt in 1862. 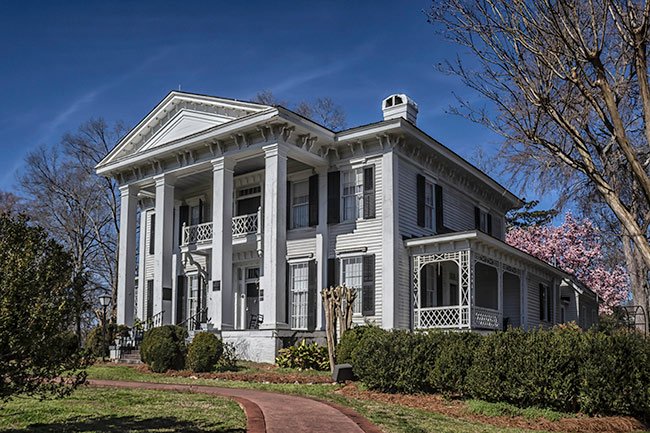 Major Burt had become friends with Jefferson Davis before the Civil War. After fleeing Richmond on his way to Georgia at the close of the war, Davis stopped at his friend’s home where he held the last meeting of his Confederate cabinet on May 2, 1865. 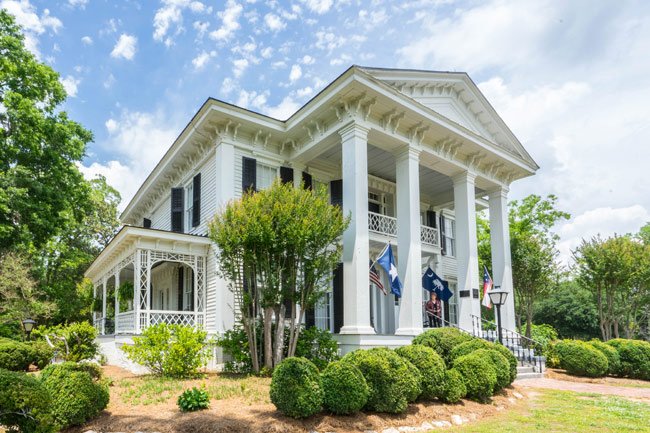 The house was purchased by James Stark in 1913, and his daughters Mary Stark Davis and Fanny Stark McKee were its last residents. The house was donated to the Abbeville County Historic Preservation Committee in 1971 by Mary Stark Davis. Located at 306 North Main Street, the home is now open for tours. 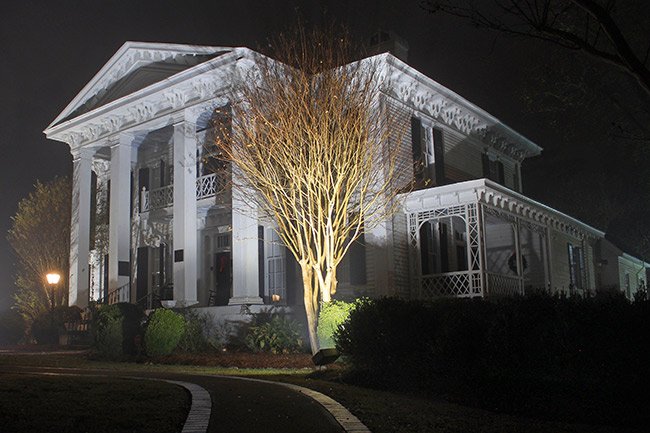 Pam Kimsey Latham of Abbeville, 2018 © Do Not Use Without Written Consent

Photos of the interior of the home are not permitted, but the collection here shows its various exterior elevations. The original detached kitchen can be found behind the home. 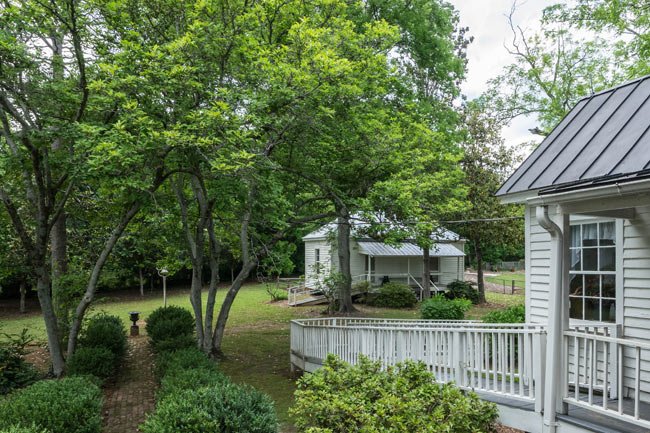 The home, which is also called the Armistead-Burt House, is listed in the National Register:

The Armistead Burt House is significant to Civil War history as it served as the location of President Jefferson Davis’ last Council of War. Despite a number of military surrenders in the preceding months, Davis was determined to continue the struggle for an independent Confederacy. He planned to rally the troops in Lt. Gen. Richard Taylor’s Department of Alabama, Mississippi and East Louisiana, cross the Mississippi, and join with forces there.

Davis was steadfast in this resolve when he reached Abbeville and took up quarters at the home of his personal friend, Major Armistead Burt. During the meeting in the southeast parlor with John C. Breckenridge, Braxton Bragg, Generals Duke, Ferguson, Dibrell, and Vaughn, Davis was advised that any attempt to continue the war would inflict more misery on the South, striking the death knell of the Confederate government. Because of this final meeting, Abbeville is known as the “Grave of the Confederacy.”

The two-story frame house, built in the 1830s, is Greek Revival in style. Four square columns support a pedimented two-story portico. Floor-length shuttered windows open onto the main portico on either side of the front door. Ornamental brackets surround the home’s entablature.

The acreage contains an original separate kitchen outbuilding. The gardens were designed in the 1830s by an English landscaper named Johnson. The narrow entrance drive, originally a carriage road, circles before the front steps where a dismount stone still stands.

More Pictures of the Burt-Stark Mansion 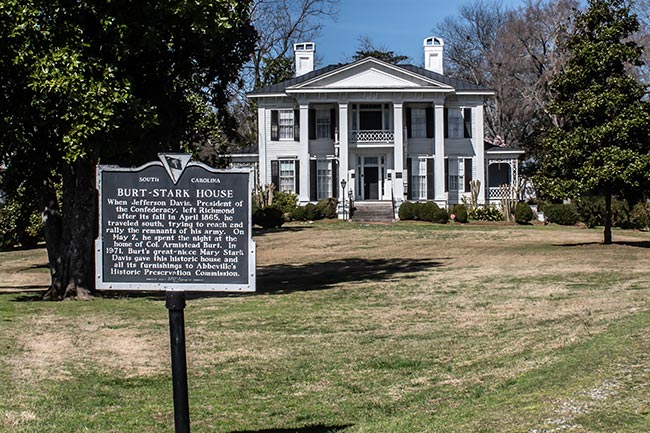 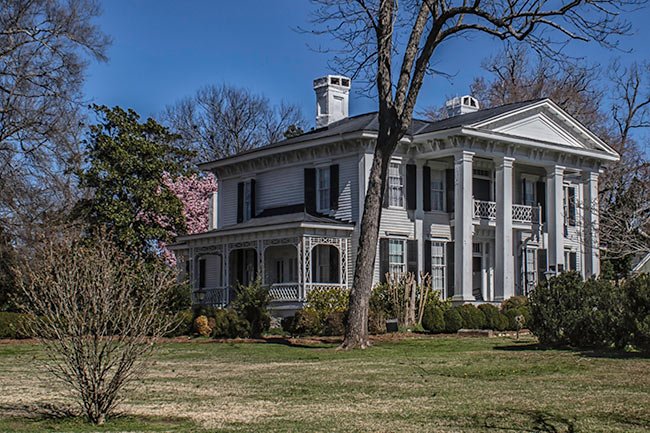 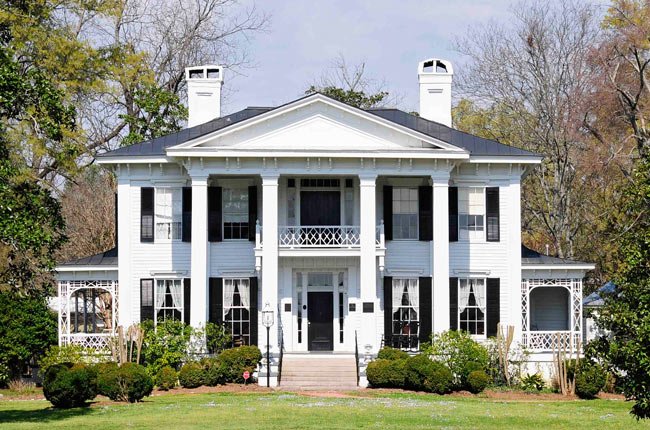 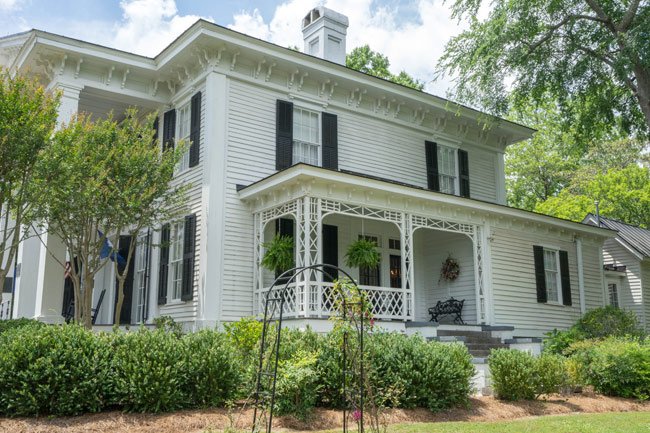 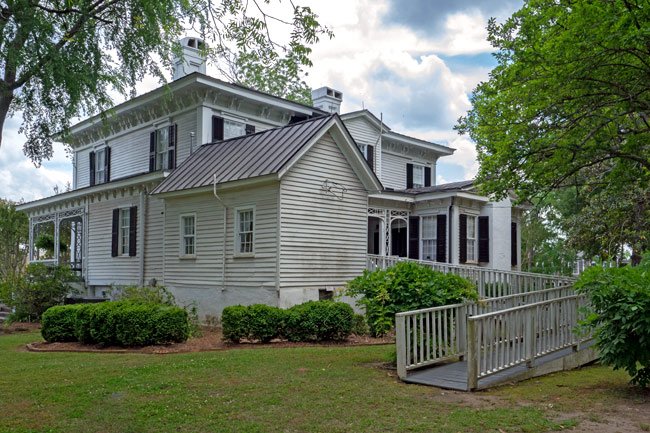 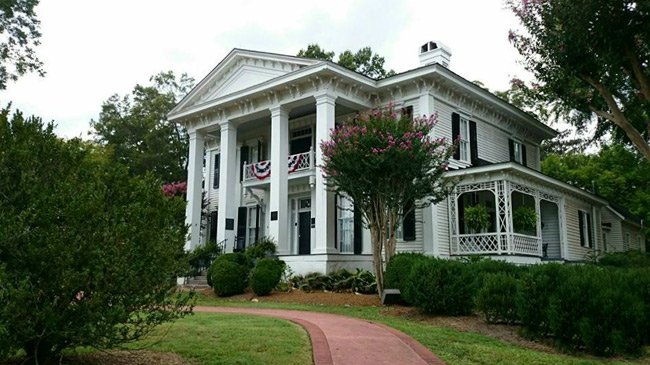 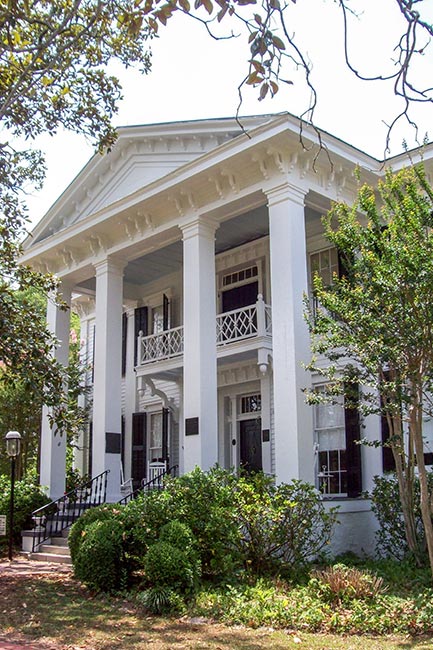