This Queen Anne-style home located in Abbeville was built for the family of prominent local businessman L.W. White in 1904. It was built on the site of the David Lewis Wardlaw House, which White tore down in order to erect this Victorian home. The house was sold to Will Harris in 1937 for his funeral home business and remains Harris Funeral Home today. The church steeple in the background belongs to Main Street United Methodist Church. 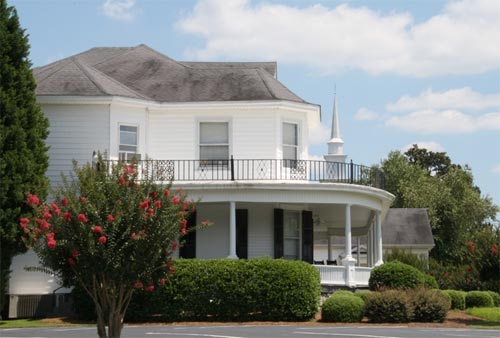 A two-story brick Second Empire home known a the Sears House stood directly next door to the funeral home for decades. Known as the Seal House for its owner, T.C. Seal, it was built in 1872 and designed by the Charleston architectural firm, W.P. Russell and Company; the same firmed designed the Calhoun Mansion in downtown Charleston. The Harris Funeral Home acquired the Seal Property and razed the home for a lawn and parking lot. When the chapel was added to the grounds in the 1990s, the grand magnolia tree that stood as the lone survivor of the Seal property was also removed. The exterior of the Harris Funeral Home was covered in vinyl in the late twentieth century, rendering it ineligible to be included in the National Register of Historic Places.

Thank you to John Blythe for much of the above information.

Reflections on the Harris Funeral Home

Contributor Mark Clark, an Abbeville native currently residing in Winnsboro, says: “My father worked for this funeral home as a young man and had to go pick up the bodies of the deceased from the local hospitals. Talk about your odd jobs! The funeral home for many years was run by one of our neighbors, Harry Chandler. My father’s funeral was held here in 1994, completing the circle of life. In Abbeville, funeral homes honor the dead but also serve as the site of informal reunions among friends who have known each other since birth.”