This stately Georgian Revival church in Bamberg has been welcoming worshipers with its grand Tuscan columns since it was built in 1928. The church formed, however, in 1872 when 11 residents of the community gathered together and participated in a church service led by two local pastors. 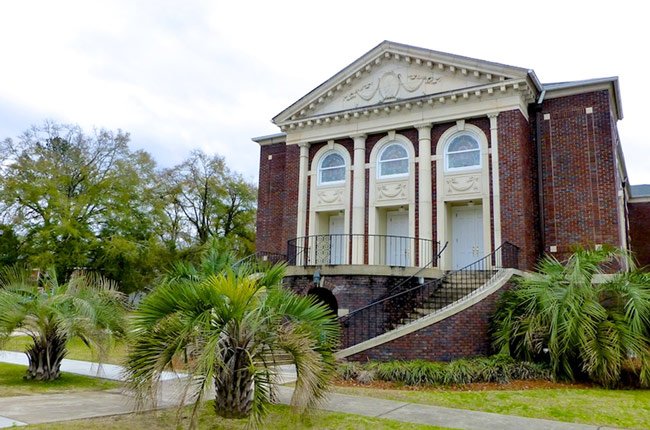 The congregation first met in a small, simple building on West Church Street. In 1894 a larger church was built on the present site to accommodate the growing congregation. That building was demolished nearly 25 years later to make room for the elegant edifice that graces the corner of Railroad Avenue and Carlisle Street today. It sits next to Trinity United Methodist Church, and the two congregations participate in a combined Bible study.

The Bamberg Historic District is a significant collection of around fifty-six contributing buildings from the period 1880-1930 which presents an accurate depiction of the foremost residential neighborhood of Bamberg of this period. The district was home to several locally important citizens. The buildings are of consistent scale, density, massing and setback, with the largest and most prominent buildings along the central section of East Railroad Avenue. The buildings of the district range from one to two-and-one-half stories and are primarily of frame construction. Most of the buildings are vernacular residences or bungalows with prominent porches and profuse carpenter’s ornamentation; a few of the largest and most notable buildings express the more fashionable architectural styles of the era, including Second Empire, Neo-Classical, Queen Anne, Victorian, Romanesque Revival and Gothic Revival. The district also includes a cemetery dating from 1852. The buildings are set on landscaped lots with tall trees.