Trinity United Methodist Church in Bamberg is the last of three churches to house this congregation, the first built in 1853 when Bamberg was a stagecoach stop called Lowrey’s Turnout. The town was chartered in 1855 and became known as Bamberg, for businessman Major William Seaborn Bamberg, who also donated land for a Methodist church two years earlier. 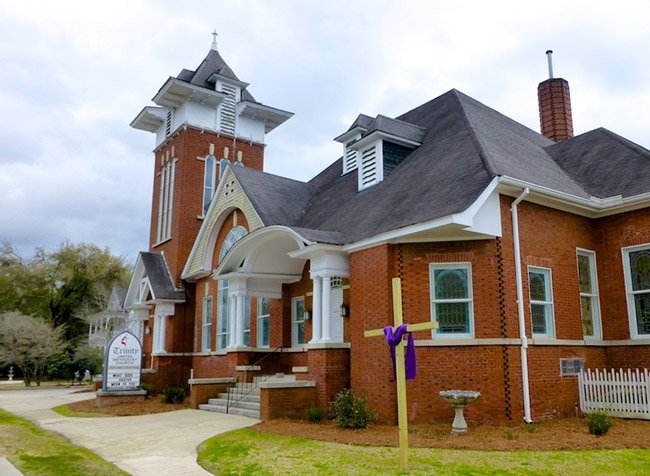 The original Trinity Methodist was a meeting house built on Church Street where Restland Cemetery now sits. Restland Cemetery is also the burial site of Major Bamberg. A second church was built in 1883 at the current site of the Carter home on Railroad Avenue, where a bridge once stood to take church-goers across the canals flanking the railroad tracks. The present Gothic Revival church was built in 1904, with an addition built in 1970. It sits next to First Baptist Church, and the two congregations participate in a combined Bible study.

The Bamberg Historic District is a significant collection of around fifty-six contributing buildings from the period 1880-1930 which presents an accurate depiction of the foremost residential neighborhood of Bamberg of this period. The district was home to several locally important citizens. The buildings are of consistent scale, density, massing and setback, with the largest and most prominent buildings along the central section of East Railroad Avenue. The buildings of the district range from one to two-and-one-half stories and are primarily of frame construction. Most of the buildings are vernacular residences or bungalows with prominent porches and profuse carpenter’s ornamentation; a few of the largest and most notable buildings express the more fashionable architectural styles of the era, including Second Empire, Neo-Classical, Queen Anne, Victorian, Romanesque Revival and Gothic Revival. The district also includes a cemetery dating from 1852.